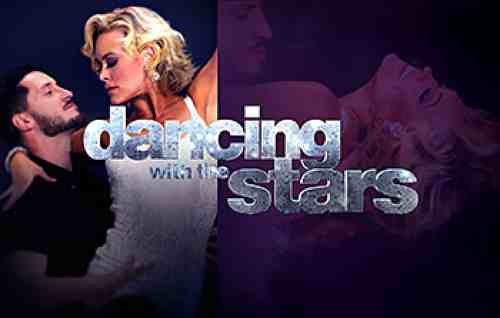 Tonight on ABC Dancing With The Stars continues with an all new Monday October 6, season 19 week 4 episode called “Most Memorable Year”. On tonight’s episode we will be going into the fourth week of performances and the show will feature songs from celebrities that encompass a memorable time or experience of their life.  Meanwhile, rumour has it drama has erupted on the set of DWTS as Antonio Sabato Jr. is rumoured to be having a fling with his professional partner Cheryl Burke.

On last week’s episode the dance assignments for the night were: Foxtrot: Alfonso & Witney, Antonio & Cheryl. Cha-cha-cha: Lea & Artem. Waltz: Michael & Emma. Viennese Waltz: Sadie & Mark. Jazz: Janel & Val. Argentine tango: Tommy & Peta. Paso doble: Randy & Karina. KEVIN HART, from “Ride Along,” “Think Like a Man” and the upcoming movie “The Wedding Ringer,” was the guest judge. Randy Couture and Karina Smirnoff were sent home after receiving a combination of the lowest judges and viewers scores. Did you watch the last episode? If you missed it, we have a full and detailed recap right here for you.

Janel Parrish & professional dancer Valentin Chmerkovskiy dancing the Rumba. Janel’s most memorable year, 2002, the year she moved from Hawaii to LA and her relationship with her first vocal coach.

Judges Comments: Julianne: “It is always so hard to come out of a package like that and do a good job, you did it, you performed from your heart. I can tell you worked hard.” Bruno: “You looked like an exotic angel, you expressed beautiful, but the spins have to be perfected.” Carrie Ann: “The best to pay tribute to someone, is to go on and live life. You were incredible, that was breath taking.”

Jonathan Bennett & professional dancer Allison Holker dancing the Samba. Jonathan’s most memorable year, 2004, when he landed the role in Mean Girls and the support he received from his parents to be an actor.

Judges Comments: Bruno: “The problem is, the Samba is a party dance, you went wrong – you could never get that easy bounce. Technically, it did not have the quality.” Carrie Ann: “I am interested to see what America votes, because they don’t vote on technique. I feel like you should have more elegance, it was very one dimensional.” Julianne: “I love the relationship that you guys have, but I do agree, it was flat – no dimension. I really want to see you do a ballroom dance, I want to see something more elegant.”

Betsey Johnson & professional dancer Tony Dovolani dancing the Jive. Betsy’s most memorable year, 1975, when her daughter Looloo was born – she is the person that inspires her.

Judges Comments: Carrie Ann: “That was phenomenal, I loved the cartwheel, well done.” Julianne: “The way that you celebrate your daughter, America celebrates you. It was impressive, every week you come out with such joy.” Bruno: “I think I saw your Victoria Secret, I have to say keeping up with the jive is tough for anyone. You did a fantastic job.”

Bethany Mota & professional dancer Derek Hough dancing the Rumba. Bethany’s most memorable year, 2009, the year she started Youtube. She started it because she was bullied by people who were her friends, they turned on her. She felt like she lost her voice, Youtube helped her to get her voice back.

Judges Comments: Julianne: “What you stand for is so beautiful, I think to love yourself is so important. There wasn’t enough Rumba content for me, but the concept was beautiful.” Bruno: “You are looking good to me kid, the message was right on the spot. But, in the Rumba there is hip action, it wasn’t quite right. Work on those hips.” Carrie Ann: “When you are totally true to yourself, it comes across beautifully. Once you let go, it was gorgeous.”

Michael Waltrip & professional dancer Emma Slater dancing the Jive. Michael’s most memorable year is 2001, winning in Daytona. I was told I was never going to win, it was amazing. My friend and mentor, Dale Earnhardt, died on the last lap. I went from the highest high to the lowest low.

Judges Comments: Bruno: “I can see the dancer inside you screaming to get out, apart from your frame that wasn’t good.” Carrie Ann: “I want to cry because that started so strong and then, at the end, it didn’t happen.” Julianne: “It pains me because there are moments that are so good and moments that are not.”

Lea Thompson & professional dancer Artem Chigvintsev dancing Contemporary. Lea’s most memorable year was 2003, when her dad was diagnosed with cancer. The way her father died, taught her how to live.

Judges Comments: Carrie Ann: “Every once in a while there are these moments on this show that touch my heart, I will remember that forever.” Julianne: “This not only moved me, it moved everyone, just point your toes more.” Bruno: “You are an exquisite performer.”

Antonio Sabato JR. & professional dancer Cheryl Burke dancing the Samba. Antonio’s most memorable year, 1989, when he was in a video with Janet Jackson; it launched his career.

Judges Comments: Julianne: “You are getting more comfortable with the steps, but I have to say, there is a space around you that you have to fill up.” Bruno: “I felt we were watching a preview of Magic Mike 2 1/2. You have to reach to full extent in your steps.” Carrie Ann: “I would like to revisit the beginning, you are proving yourself but we need you to open your chest. Don’t close yourself up.”

Tommy Chong & professional dancer Peta Murgatroyd [9:53:08 PM] Celeb Dirty Laundry: https://www.celebdirtylaundry.com/2014/tommy-chong-peta-murgatroyd-dancing-with-the-stars-jive-video-season-19-week-4-10614-dwts/ dancing the Jive. Tommy’s most memorable year was 2003 when he went to prison. I lost all my freedoms, I was helpless, it chilled me to the bone. I learned how to live each moment, one moment at a time.

Judges Comments: Bruno: “There is no chain in the world that can bound your free spirit. A couple of mis-steps, but good.” Carrie Ann: “I love your naturalness, dance is a visual sport, there were a lot of mistakes but it was totally natural.” Julianne: “There is no denying you love to dance and that was enjoyable, but it was not your best dance.”

Sadie Robertson & professional dancer Mark Ballas dancing the Samba. Sadie’s most memorable year was 2012 when her family started Duck Dynasty. The attention has been great, but there has been a lot of negativity – so it has been tough.

Judges Comments: Carrie Ann: “That was fantastic, by far the best Samba tonight. Well done tonight.” Julianne: “That was the perfect combination of content and concept. What you did with the story, you did not lack in technique. I love your arms.” Bruno: “What is going on here? The little girl has some bite! Way to go baby, way to go.”

Alfonso Ribeiro & professional dancer Witney Carson dancing the Jazz. Alfonso’s most memorable years where when he was on Fresh Prince of Belair, but it was a struggle because it stunted his career. My number one goal this week is to please the fans and give America what it has been wanted, the Carlton.

Judges Comments: Julianne: “Yes, I am so glad that you made us wait for that. People are going to remember Alfonso.” Bruno: “Role play in Broadway Style.” Carrie Ann: “Finally.”

Time to find out which of the three couples in jeopardy is safe; Tommy Chong & professional dancer Peta Murgatroyd.