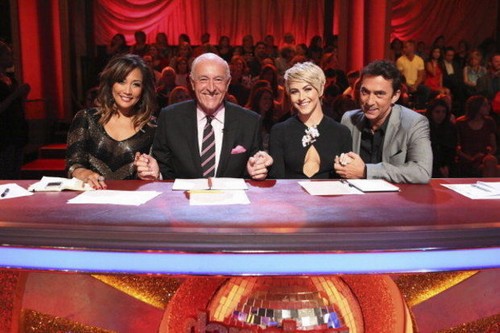 Dancing with the Stars Season 19 is proving to be the absurd melodrama we all expected with Lolo Jones’ elimination in week 1. S**t happens. The winner doesn’t necessarily take it all. Oprah lied when she said we’re all winners. We’re not. Millions of people lose the lottery on a weekly basis. Some of us lose our minds, while others lose their keys. We’re all a bunch of naive losers. Sad but true.

Excuse the cynicism – I recenty lost all of my Monopoly money because some idiot bought a trillion red hotels and passed “Go” too many times.

Reality television is a perfect example of this “lost-everything-ohmygahd-loser” premise. Hundreds of ordinary people are voted off, fired and eliminated on a yearly basis. Several of these pseudo-celebrity reality shows actually use real celebrities as contestants e.g. The Celebrity Apprentice. But one such show tossed the recipe in the trash and burned the soufflés.

Dancing with the Stars season 19 is a camp foray into the kitsch underbelly of Celebrity Land. A group of what-happened-to-insert-name-here celebrities are taught how to dance – and cry – on national television. Each celebrity is paired up with a professional dancer for the duration of the show. The hybrid horror-teams have to dance and choreograph their way to the top, all while avoiding elimination, broken bones and nervous breakdowns. To add insult to injury (ha), teams are also criticized by a panel of four pretentious judges: Bruno Tonioli, Len Goodman and Carrie Ann Inaba, and nasty Julianne Hough.

Bruno – bless his kitsch heart – hates sore losers, especially former Olympian Lolo Jones. Said athlete lost her collection of mad marbles after being eliminated from the show. She wrote on Facebook, “When I was dancing last night and messed up I had flashbacks of the three Olympics and that people constantly tease me about. I thought oh no here it comes again. People are going to ridicule me. I’m so tired of feeling embarrassed. I joined the other competitors upstairs and I couldn’t force a smile on my face. I felt like vomiting and in between the other dances I went in a back room and fought back tears. I felt so broken. So unlovable. Embarrassed.”

Bruno Tonioli didn’t approve of Lolo Jones’ emotional and slightly crazy Celine Dion outburst. According to one of CDL’s exclusive sources, “Bruno lost it behind the scenes. The show is very important to him. Lolo’s emotional breakdown made us all feel like idiots. She knew what she signed up for. If you can’t handle the heat… Don’t do reality television. People get hurt. It’s part of life. She needs to shut the f**k up and move on with her life.“

We lied. The winner does take it all. I took the Monopoly board and the red hotels and then I burned it all.