Days Of Our Lives Spoilers: Kristen Arrested at Police Station After Daniel Turns Her In – Brady’s Meltdown (VIDEO) 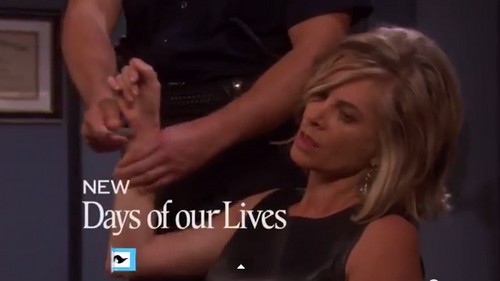 Days Of Our Lives spoilers have teased for months now that Eileen Davidson was returning to DOOL as Kristen DiMera. So, you can imagine everyone’s disappointment when Kristen arrived in St. Louis and was playing a game of cat and mouse with Dr. Daniel Jonas for nearly two weeks. Days fans wanted to see Kristen in Salem, not St. Louis. We’ve been sitting on the edges of our seats waiting for all hell to break loose since Kristen returned to DOOL, and it looks like the time has finally come.

NBC has released an all new Days of Our Lives spoiler video, and the video teases, “Caught and in custody. Now there is no escaping her enemies, or the one man she destroyed.” In the DOOL spoiler video, Daniel and another cop march a handcuffed Kristen DiMera into the police station, where EJ, Nicole, Eric, Jennifer, Marlena, and Sami all stare at her in a state of shock. Kristen teases, “I’m so flattered that you all showed up for my Homecoming.” At the end of the spoiler video, Brady has a meltdown when he learns Kristen is back and screams that he wants to see her — now!

It looks like Days of Our Lives is finally starting to get good. It will be interesting to see what exactly Kristen is supposedly being charged with at the Salem police station. Anything that she did to Daniel technically happened in St. Louis, and Daniel kidnapped her as much as she kidnapped him. Perhaps they will charge her with a crime she committed before she left Salem? Nicole destroyed all of the evidence proving that Eric was raped, so they will have a hard time proving that.

What do you think Days fans? Will the Salem police actually charge Kristen DiMera with any crime, and will they be forced to let her go so that she can roam the streets of Salem? Let us know what you think in the comments below and don’t forget to check CDL for all of your Days Of Our Lives spoilers.