Days of Our Lives Spoilers: Was EJ DiMera Really Killed or Will Kristen and Stefano Bring Him Back From The Dead? 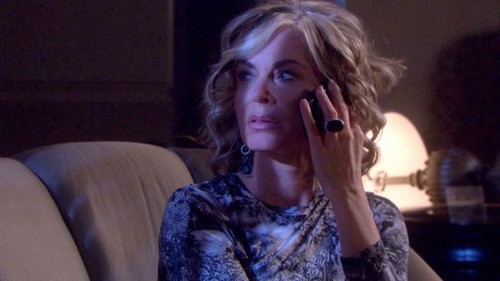 Days of Our Lives spoilers have been teasing for months that James Scott was leaving DOOL and his character would be killed off. So, last week when EJ was shot and killed in the Salem park, Days fans weren’t completely shocked when it occurred. Something has been a little unsettling about EJ”s death thus far though. EJ DiMera has been a primary character on Days of Our Lives for nearly a decade. How could the writers just kill him off via a boring old shooting in the park, by a character we have known for just a few months? Doesn’t EJ DiMera’s exit deserve a bigger bang (pun intended) than that?

Well, according to Days of Our Lives spoilers, EJ’s exit might just be much bigger than the simple shooting in the ark after all. DOOL spoilers tease that in the last few minutes of the Monday, October 14 episode of the NBC soap opera, Stefano called Kristen DiMera and sent her on a mission after warning her that “time is of the essence.” Kristen snuck in to the morgue where her brother’s lifeless body was lying on a table, and injected something into his arm out of a syringe.

What could Kristen and Stefano possibly be up to? Are they bringing EJ DiMera back to life, just so he can leave again? We know for a fact that EJ is exiting Days of Our Lives this month, but maybe his exit is a little more complex than we thought it would be. And, it wouldn’t be far-fetched to assume that Kristen and Stefano have what it takes to bring someone back from the dead. After all, is there anything that they can’t do? And, let’s not forget, Kristen just got her hands on a miraculous medicine that woke John up from his coma. So, maybe she was able to find a medicine that can bring the dead back to life.

What do you think Days fans? Are Kristen and Stefano going to bring EJ DiMera back to life? Perhaps he and Sami will get the exit fans have been hoping for and will run away from Salem together? Let us know what you think in the comments below and don’t forget to check CDL tomorrow for more Days of Our Lives spoilers.