Days of Our Lives Spoilers: Chad and Kate Scheme Over DiMera, John Summons Theresa, Stefano Learns EJ and Sami Together 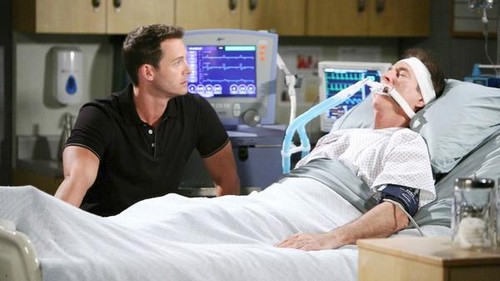 Days of Our Lives spoilers reveal that the week of September 29 will be full of drama and DOOL fans will not want to miss an episode. A few relationships will really heat up, and some of the Salem couples will crash and burn. Days fans can also expect some intense moments between some of Salem’s leading ladies as cat fights run rampant.

Monday September 29: Days of Our Lives spoilers reveal that on September 29 Hope decides to go out on her first date as a single woman since she announced her divorce from Bo. After months of awkward flirting, Hope and Aiden decide to go out on a date, but spoilers tease that it is an epic failure. And, Kristen’s doppelganger Susan Banks delivers an important message to her son EJ DiMera.

Tuesday September 30: On Tuesday’s episode of Days of Our Lives, EJ and Sami’s reconciliation becomes public knowledge and no one is breaking down the door of the DiMera mansion to offer their congratulations. As a matter of fact, Stefano is furious when he learns that his son has decided to take back one of the women that tried to destroy DiMera Enterprises.

Wednesday October 1: Days of Our Lives spoilers reveal that on Wednesday fans can expect to see Paige and JJ’s relationship crash and burn once again when Paige realizes that JJ is hiding something from her, but the young lover is torn about whether or not he should come clean. Meanwhile across town, Salem’s residential schemers Chad DiMera and Kate begin setting in to motion their plan to take down Stefano.

Thursday October 2: Days fans can expect to see Ben and Abigail’s relationship really heating up, spoilers reveal that they make love for the first time on October 2nd. Kate reportedly spends her day harassing Jordan about Rafe and Clyde, and Nicole and EJ share an unexpected moment together.

Friday October 3: DOOL spoilers reveal that Victor has life-changing shocking news for EJ DiMera. John Black is awake and kicking, and his first order of business? Theresa Donovan is shocked when John requests a private meeting with her in his hospital room, she heads to Salem hospital to learn whether or not she will be spending her life in prison, but rumor has it that John has different plans for her.

So DOOL fans, what kind of message do you think Susan Banks has for EJ? Do you think Chad and Kate will be take down Stefano, or is Chad playing both sides? And, what about Theresa and John Black, what could he possibly want to talk to her about? Does he remember that she is the one that hit him over the head? Let us know what you think in the comments below and don’t forget to check CDL tomorrow for more Days of Our Lives spoilers.