Days of Our Lives Spoilers: Will or Sonny Confesses To Nick’s Murder – Shocking Twist – More Than One Shooter?

BY Amanda Austin on May 21, 2014 | Comments: one comment
Related : Days of Our Lives, Soap Opera, Spoiler, Television 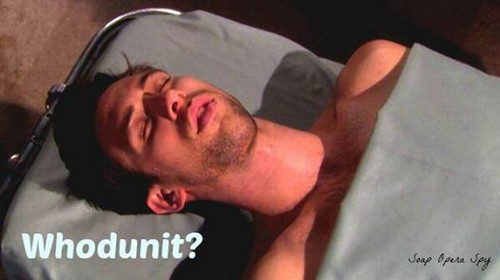 Days of Our Lives fans have been waiting for what seems like forever to learn which Salem resident pulled the trigger and killed Nick Fallon. DOOL spoilers tease that the wait will soon be over, and on Tuesday May 27 the case will finally be solved when someone confesses to Hope that they murdered Nick.

According to Days of Our Lives spoilers that are currently floating around the internet, on May 27 Hope will arrive at the Kiriakis mansion with a search warrant. However before she has a chance to search for any evidence, either Will or Sonny confess to killing Nick Fallon.

Will and Sonny definitely both have a motive and were afraid that Nick was going to take Arianna away from them, and Will got into a physical altercation with Nick right before he was murdered. They also both had access to Stefan’s gun, which they were trying to sneak back into its hiding place undetected after Nick’s death.

However, DOOL spoilers also tease that on Friday May 30th there is a “shocking twist” in Nick’s murder case. If Sonny or Will already confessed, what “shocking twist” could there be? Shouldn’t the case be closed? Unless, Sonny or Will are innocent, and one of them confessed to protect the other one. For example, if Sonny was afraid Will killed Nick, he may have panicked when Hope walked in with a warrant and confessed to the crime because he didn’t want to see Will arrested and sent to prison.

Also, another possible shocking twist and a popular theory among Days fans is there could have been more than one shooter. What if Will and/or Sonny shot Nick with Stefan’s gun, but unbeknownst to them someone else came along and shot him afterwards? Or perhaps Nick was already shot and wounded, but then Will and/or Sonny came along and finished the job?

What do you think DOOL fans? Could Will or Sonny really be Nick’s killer, or are they just covering for each other? And, what about the multiple shooter theory? Wouldn’t that be crazy if more than one person in Salem went down for Nick Fallon’s murder? Let us know what you think in the comments below, and don’t forget to check CDL tomorrow for more Days Of Our Lives spoilers.