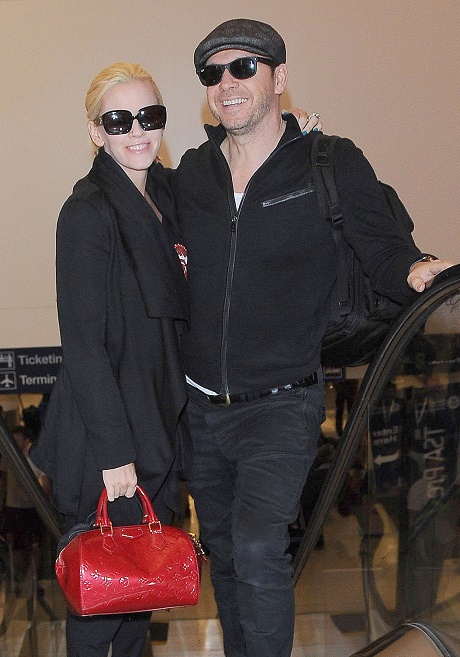 Donnie Wahlberg and Jenny McCarthy are married, much to the displeasure of Donnie’s entire family, including Mark Wahlberg. Mark and his wife didn’t even deign to make an appearance at Donnie’s wedding, instead sending a video message of congratulations. And if Mark Wahlberg was that apathetic towards his own brother’s wedding, can you imagine his reaction when he hears that Donnie Wahlberg and Jenny McCarthy are now getting their very own reality show?

Yeah, this is what our world has come to. Donnie Wahlberg and Jenny McCarthy – celebrities with fairly influential family connections – are resorting to dabbling in reality TV. The A&E Network has reportedly entered into a production deal with Donnie and Jenny, and their first project will be called ‘Donnie Loves Jenny’. So imaginative.

Jenny McCarthy and Donnie Wahlberg even released a statement claiming, “We’re so excited about this deal and look forward to a long and successful relationship creating entertaining and provocative unscripted programming with our partners at A&E. Our feeling is, who better to make our first show for the network about than about us? We love working together and with our crazy schedules this gives us the chance to both work and play together.”

The first season will comprise of 10 episodes, and will feature Donnie Wahlberg and Jenny McCarthy on their ‘journey’ from their wedding, all the way through to their life as newlyweds. In other words, it will be just as cringe-inducing as the other reality crap on offering right now, but perhaps doubly embarrassing since we know that Donnie Wahlberg and Jenny McCarthy will be getting crap from their families for doing this.

What do you guys think? Will you be tuning in for Donnie Loves Jenny? Let us know your thoughts in the comments below.