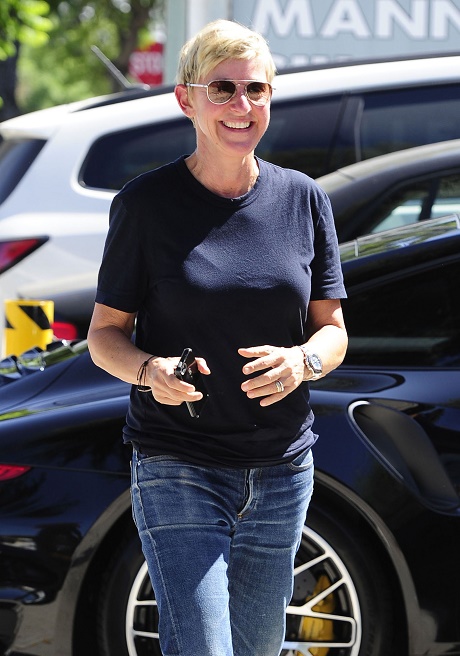 There’s a new report going around about how Ellen DeGeneres is ‘obsessed’ with plastic surgery. Um, everyone in Hollywood over the age of 40 dabbles in plastic surgery, but that doesn’t mean they are ‘obsessed’ with it. It just means that they understand the realities of Hollywood and the unfortunate and sexist pressures that they are under, and are doing their best to keep their careers alive.

Now, Ellen’s supposed reliance on plastic surgery [and by plastic surgery, I don’t see her getting anything other than Botox, facelifts, and a few rounds of laser and injections] could have something to do with her reportedly failing marriage to Portia de Rossi. However, the National Enquirer claims that Ellen is driving her staff crazy with her excessive beauty routine. The Enquirer’s source explains, “She had a lift and still gets Botox! She drives her hair and makeup staff nuts! It usually takes them about two-and-a-half hours to give Ellen that peaches-and-cream glow her fans love.”

That source also adds, “She pretends not to care about her appearance to the world but in reality, she’s obsessed with plastic surgery — and a sucker for new cosmetic procedures and products.”

Again, Ellen DeGeneres is 56 years old. Trust me, there’s no woman in Hollywood at that age that hasn’t had SOMETHING done to her face, even if it’s just a few rounds of Botox. I hate the sexist gender bias that tabloids have against females in Hollywood over a certain age, when the men rely on plastic surgery and Botox just as much. It’s just that it’s considered more acceptable for them to partake in it, for whatever reason. Let the poor woman have her plastic surgery, for god’s sake. She doesn’t look like  the crypt keeper, and that’s honestly as much as we can hope for.