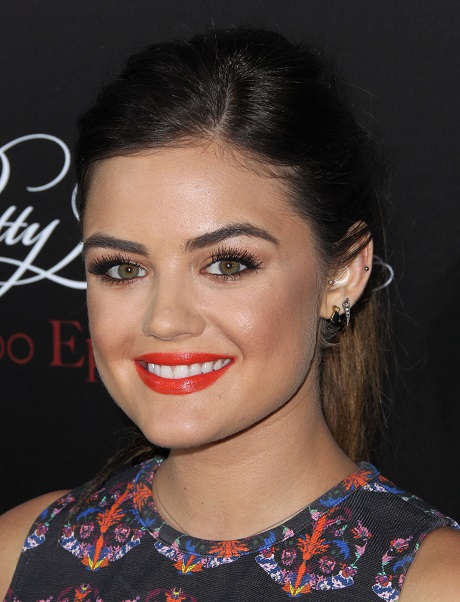 In an interview with MTV News, Lucy reveals details about her audition, explaining, “I think any girl in my demographic would have loved to be a part of it. Mainly, I was just interested in doing something risky and doing something a little different than my character on ‘PLL,’ so it took me out of my comfort zone.”

Um yeah, I definitely don’t agree that any girl in her demographic would have ‘loved to be a part of it’. For one, actresses in her ‘demographic’ include Emma Stone, Emma Watson, Mia Wasikowska, Jennifer Lawrence, and Shailene Woodley. There’s no way in hell that any of those girls would be caught dead acting in Fifty Shades of Grey, even if they were offered the role. In fact, it was rumored that Emma Watson was actually approached to play the character, but she turned down the part.

However, even though Lucy didn’t end up getting the part of Anastasia Steele [that dubious honor went to Dakota Johnson], she reveals that the audition was incredibly embarrassing. She explains, “It actually was just me [in the audition]. It was a two-page monologue of exactly what you would think it would be. Very uncomfortable, but it was sort of one of those things where you just had to go for it or you’re just gonna look lame — hopefully, I didn’t look lame.”

Among all the audition details, Lucy actually reveals something quite interesting about the casting process – when she was auditioning, the producers didn’t yet have a Christian Grey. This goes in line with earlier reports stating that the producers rushed casting on its two leads after an exhaustive search that didn’t yield anything. It also explains why Charlie Hunnam both signed on and left the project with such a short notice.