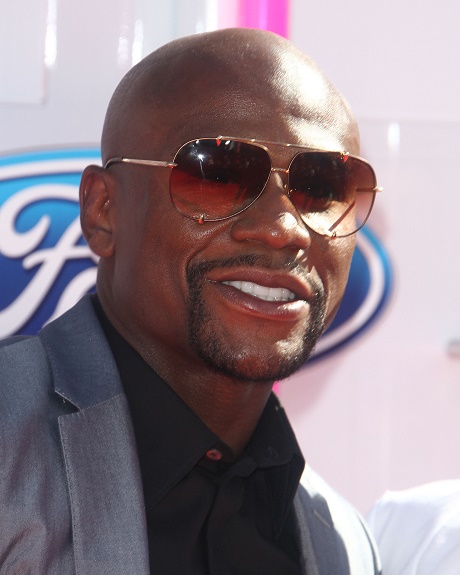 The drama that began when the relationship between Shantel Jackson and Floyd Mayweather Jr. ended, just got way more serious. The couple, who were previously engaged, has had a very public, and very intense, breakup that involved Shantel becoming involved with rapper Nelly, and Mayweather posting pictures of a sonogram with accusations that his former fiancé aborted their unborn twins.

Now, the tit-for-tat just got very real, as Jackson has filed a lawsuit against Mayweather, making some very serious accusations. According to TMZ, Jackson’s suit involves claims that, on at least two separate occasions, the boxer was violent with her. The first incident included in the suit references a 2012 argument the couple had which ended with Mayweather twisting Jackson’s arm, choking her, and aggressively taking her phone with the intent to look through it.

A second incident in the suit, obtained by TMZ Sports, references a 2013 fight between the two which became so violent, Mayweather bent Jackson’s arm, restrained her, and threatened to shoot her in the foot, before demanding her massive diamond engagement ring back with a gun still pointed at her. And, in 2014, Jackson claims there was yet another violent fight where she was dragged back inside Mayweather’s condo upon attempting to leave.

Now, Ms. Jackson has hired well-known attorney Gloria Allred who, of course, has already held a press conference with her client. Allred’s client is also suing for invasion of privacy over Mayweather’s posting of the couple’s sonogram to social media. In between filming a new reality show with boyfriend Nelly, Jackson is busy working with Allred on her lawsuit, which includes assault, battery, defamation, invasion of privacy, intentional infliction of emotional distress, and harassment.

Hopefully, Jackson pulls in some money from her reality show and can lock in Nelly because her sordid past is not so squeaky clean either. In fact, earlier this year, Shantel was accused of having relations with an Atlanta producer, who was previously dating Vivica Fox, and another rapper, 50 Cent. In fact, there have been some jokes and barbs thrown back and forth between Mayweather and both Nelly and 50 Cent, with 50 Cent even commenting about how Nelly stole Mayweather’s lady. There was also another incident even earlier in the year when Jackson was said to be cheating with Ray J.

So, did all of the cheating finally get to Mayweather — to the point where he exploded on his fiancé, despite already having served time for domestic violence on a former girlfriend? Or, as Jackson never came forward about this until now, is she bending the truth to get back at Mayweather for all the emotional pain he has caused her, opting to file the suit only about one week prior to the boxer’s big rematch against Marcos Maidana? Did Allred egg her on to beef up her story, or is Mayweather a monster who bullies his girlfriends? We know what WE think.. Now tell us what YOU think, CDLers!