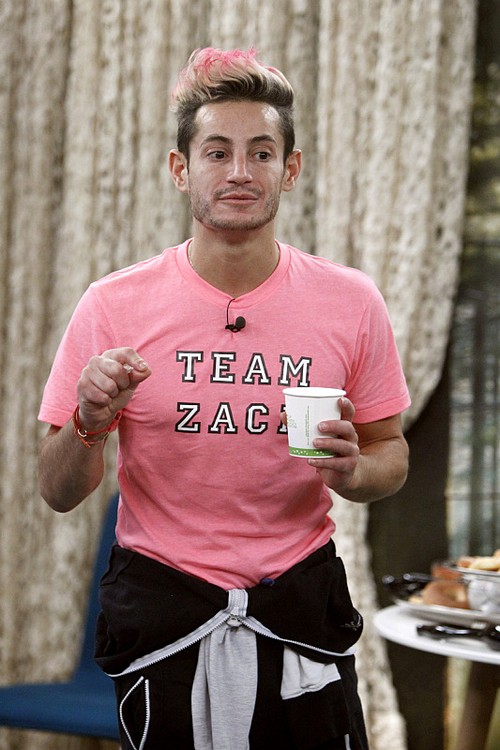 On Big Brother 16 spoilers it seems like a foregone conclusion that Frankie Grande is gone and the final four houseguests will be Victoria, Cody, Derrick and Caleb. With Frankie being among the Big Brother 16 favorites and arguably the best competition player in the house, it is a bit surprising that he is headed out of the game now, in week 5. Being a huge fan of the game, Frankie seems to realize the writing is on the wall. There is always a chance he could pull out a last minute save, but it is not very likely. With his exist imminent, we as fans might have to wonder where he messed up.

What moves led to Frankie being eliminated at the final five vote? Here are my theories:

I think Frankie’s first mistake was his arrogance. Big Brother 16 spoilers show Frankie has acted as though he is royalty for a large majority of the time that he has been in the Big Brother house. This attitude is something that the houseguests surely picked up on and grew weary of. Frankie was also a bit too heavy handed with his dealings. In other words, he was too obvious about the decisions and opinions that he had. Derrick, in contrast, would lead from behind the scenes.

Frankie spread himself too thin as well. This guy was lying to so many people at the same time that it was inevitable that it would fall apart. Playing so many people so actively is a mistake in Big Brother. You have to pick and choose where you are going to fib and be sure you cover your tracks at least until eviction night. Frankie was all over the place and extremely loud with his lies.

Frankie also did not pick his allies very well. He at one time was aligned with Zach, which admittedly was ill conceived given Zach’s explosive nature. Zach put Frankie down the totem pole with the others on many occasions and left Frankie sort of riding the fence. Because of this, Frankie should have simply stayed with Zach and gathered a new alliance when it was available.

Finally, and most notably, Frankie should have never revealed his sister and his fame. The moment he told everyone that he was Ariana Grande’s brother he was immediately toast. Then to move on saying that he was “playing for charity” and so forth only made it worse. By admitting these things, he put himself on a different field than the rest and made them view him differently.

The last thing you want in Big Brother is to stand out….

Update: Frankie was evicted as predicted on 9/16/14 – then Derrick won the Head of Household Competition and is now HOH. Predictably Derrick nominated Victoria and Caleb for eviction – then to seal Caleb’s fate Cody won the POV! You can read all the details from our live feed coverage here – but bottom line is that Caleb is toast!