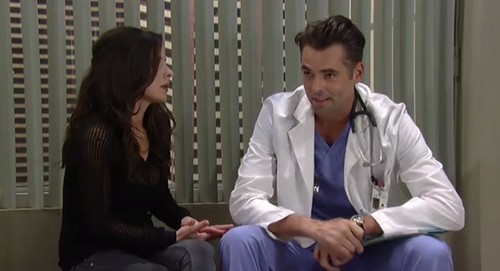 General Hospital spoilers tease that romance will be in the air on the December 29 episode of the ABC soap, and JaSam fans might want to sit this one out. GH fans have been waiting on the edge of their seats for Jake’s (Jason Morgan) true identity to be revealed so that he can be reunited with his wife Sam and son Danny – but a reunion for the family doesn’t seem to be in the cards for the popular couple, not any time soon anyways.

In an all new General Hospital spoiler video for December 29, Sam Morgan and Patrick Drake discuss the kiss they shared on Christmas and whether or not they should take the dive from friends, to the next step – and officially date. Patrick reveals to his long time friend, “I think we have something between us and I would like to explore it. But, if you don’t want to I would understand.” In the GH spoiler video, Sam reassures Patrick that she does want to take their relationship to the next level, she is just scared because she doesn’t want to hurt their friendship.

So, if you are on of the General Hospital fans that have been rooting for Sam and Patrick to hook up for months now – then you are in luck, because it looks like the GH writers are definitely going there. But, ironically General Hospital coming and goings news confirm that Patrick’s estranged wife Robin Scorpio-Drake is also headed back to the ABC soap although her appearance will most likely be a brief one again. However, there is a chance her arrival could totally derail “SamTrick.”

So GH fans, would you like to see Sam Morgan with Jason or Patrick? How long will the new couple last? Will Robin’s return send their relationship in to a tailspin? Let us know what you think in the comments below and don’t forget to check CDL tomorrow for more General Hospital spoilers and news.