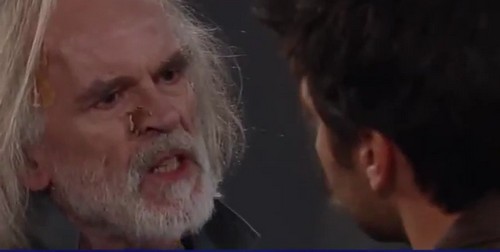 General Hospital spoilers tease that on the Wednesday December 3 episode of the ABC soap, Fake Luke will finally be unmasked by Anna Devane and Dante Falconerri. The GH promo video for Wednesday’s Dec. 3 episode reveals that the man in the Luke Spencer mask that was about to shoot Julian Jerome…is none other than Cesar Faison. In the all new spoiler video Dante and Anna look on in shock as Cesar screams that it is “all Anna’s fault,” with pieces of the mask still stuck to his face.

So, Fluke is Cesar Faison? We’re not buying it. There are some major holes in this storyline, and as far as we are concerned Fluke is still out there and Cesar was just a decoy. First of all, Fluke’s main goal from day one was to take down Sonny Corinthos – and that’s not Cesar’s MO. Plus, Cesar is head over heels obsessed with Anna Devane, we can’t picture him groping Kiki or hitting on anyone else. Then there’s the obvious problem, Fluke pulled on his face and proved that it was real and wasn’t a mask last week, not to mention the fact that Julian already said that Fluke got plastic surgery to look like Luke.

In other General Hospital news, it looks like Britt Westbourne is coming clean, and Nikolas won’t be forgiving her after her latest scheme is revealed, he can be seen screaming at her in the GH promo for December 3rd. Meanwhile, across town Alexis decides to come clean as well, and confesses to her daughter Molly that she has been with Julian. And, Crazy Franco and Crazier Nina decide on what to call the newest addition to their twisted family, Baby Corinthos is finally getting a name!

So General Hospital fans, do you think that Cesar Faison is really Fluke, or a decoy? Is this officially the end of Britt and Nikolas, is there any chance he is forgiving her? How do you feel about Franco and Nina raising Ava’s baby? Let us know what you think in the comments below and don’t forget to check CDL tomorrow for more General Hospital spoilers and news.