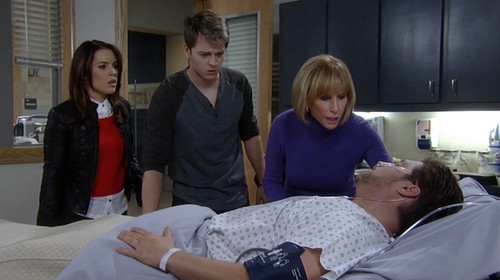 General Hospital spoilers are leaking left and right regarding the Fluke mystery, and his evil counterparts Helena, Lord Ashton, Cesar Faison, and Jerry Jacks. Along with all of the General Hospital spoilers floating around, there are quite a few of rumors regarding the soap floating around as well. We always love a good rumor, because most of the time rumors turn in to actual spoilers. Here are a few of our favorite rumors currently making their rounds on the internet.

Sabrina & Carlos: It’s no secret that General Hospital is cleaning house, and trying to get some of their countless minor characters ushered off the canvas. Rumor has it that Carlos (as a free man) will reunite with Sabrina for the holidays. The couple decides to leave Port Charles for good, and turn over a new leaf, drama-free.

AJ Quartermaine Is Back: Sonny Corinthos just pled guilty to AJ Quartermaine’s murder, the only thing that could save him from spending the rest of his life in prison, is if AJ miraculously came back to life. And, rumor has it that is exactly what might happen. Rumors have been floating around for months that AJ faked his own death with the help of Monica, and he will be back in Port Charles sooner rather than later. Once word gets out that AJ is still alive, Sonny will be able to walk free.

Kiki and Morgan Reunited: Michael Quartermaine, formerly known as Michael Corinthos, kicked his girlfriend and brother to the curb when he learned that they knew Sonny killed AJ and hid it from him. Hopefully, Michael doesn’t forgive Kiki and try to win her back – because rumor has it she and her ex Morgan grow very close while comforting each other over their fights with Michael and wind up hooking up again.

Lulu’s Egg: With all of the Fluke drama and villains coming out of the wood work, we nearly forgot about the fact that Helena stole Lulu’s last embryo right before Crichton Clark went up in flames. Rumor has it that Lulu’s embryo becomes a very important storyline, and Helena will be using it as a bargaining chip in no time.

So GH fans, do you think AJ Quartermaine is really dead, or did Monica take him somewhere from the hospital to protect him since everyone was trying to take him out? How will Michael react if he finds out that Sonny didn’t actually kill AJ and he changed his name for nothing? Do you think Kiki belongs with Morgan or Michael? Do you think Helena may have locked the real Luke Spencer up with Robin? Let us know what you think in the comments below and don’t forget to check CDL tomorrow for more General Hospital spoilers and rumors.