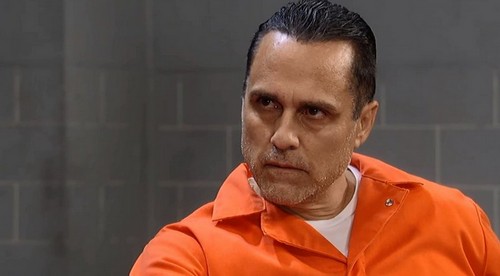 General Hospital spoilers for the week of December 1–5 tease drama-packed episodes of the ABC soap, and rumor has GH fans will not want to miss a single one! GH spoilers tease that Sonny Corinthos is really headed off to prison, but that doesn’t mean he’ll be off screen. The mobster will actually have a few storylines behind bars, like this week when he comes face to face with Johnny Zacchara (Brandon Barash).

According to General Hospital spoilers, during the week of December 1 GH fans will see Franco and Nina, and the Corinthos baby again. And shocker – it looks like Franco might still have a tiny shred of a heart and is considering doing the right thing and give Ava her baby back.

In other General Hospital news, during the week of December 1 GH fans can expect to see the wicked sisters Madeline and Liesl face off, and frankly we have no idea which villainess we should put our money on. There’s no doubt that Liesl is a little upset that while she has been mourning Cesar Faison, her sister Madeline has known he was alive and well and had him under her thumb the entire time. Alexis and Molly share a heated conversation, Julian decides to come clean to Jordan, and Sabrina and Michael have a heart to heart.

So General Hospital fans, do you think that Johnny will be able to shed any light on some of the Port Charles mysteries when Sonny chats with him? Will Franco really do the right thing and hand over Ava’s baby? If Liesl and Madeline go to war, which crazy woman do you think will come out on top? Let us know what you think in the comments below and don’t forget to check CDL tomorrow for more General Hospital spoilers and news.