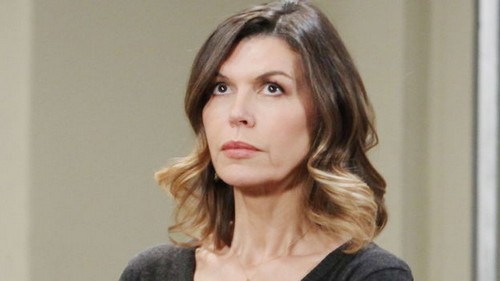 With all of the drama on General Hospital, Anna Devane’s hubby Duke seemed to have gotten put on the back burner. But, according to General Hospital spoilers, he has an interesting new storyline coming up on the ABC soap opera. Anna is pretty busy with all of the mob wars, resurrected Cassadines, and bombings in Port Charles. But, it looks like now she is going to have to have to pencil in some time in her busy schedule to keep an eye on Duke!

According to General Hospital spoilers in the October 13th edition of Soap Opera Digest, Duke has a new admirer, Lucy! Recently Scott broke Lucy’s heart when her affair with him was exposed and she lost her husband over it. To add insult to injury, Scott chose Bobbie over Lucy. So, she went from having two lovers to having zero lovers. Obviously Lucy needs a shoulder to cry on, and of all the shoulders in Port Charles, she seems to have chosen Duke’s.

General Hospital spoilers in SOD reveal, “Lucy turns to Duke for comfort – again – in her moment of emotional need after an uncomfortable run-in with Scott and Bobbie. When Anna finds the pair together she is far from thrilled.” Duke doesn’t seem like the cheating type, but as Soap Opera Digest points out, we can’t forget that Duke also despises Scott for letting Julian Jerome off the hook. So, he may put his desire for revenge ahead of his relationship with Anna. What better way to run Scott the wrong way than hook up with his ex-mistress?

So GH fans, what do you think of the possible love triangle developing between Anna, Duke, and Lucy? Do you think Anna has anything to worry about? Would Duke really cheat on her, with of all people, Lucy? Let us know what you think in the comments below and don’t forget to check CDL tomorrow for more General Hospital spoilers.