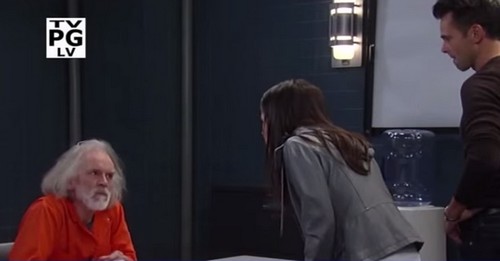 General Hospital spoilers tease that Thursday December 4 episode of the ABC soap will be another action-packed day in Port Charles, and rumor has it GH fans won’t want to miss a single second! Sam Morgan heads straight to the police station to confront Cesar Faison and in the all new spoiler video she can be seen growling at him, “You killed my husband.” GH spoilers already confirmed this week that Patrick comes clean to Sam and reveals that Robin was trying to revive him at Crichton-Clark, so perhaps he sets the record straight to Sam tomorrow and reveals Cesar didn’t technically kill Jason Morgan.

In other General Hospital news, the December 4 promo reveals that Jason Morgan finds a photograph of Helena Cassadine and explains to a shocked Elizabeth that she is the old woman that stopped by her house on Thanksgiving. Meanwhile across town, Helena comes face to face with Liesl Obrecht, who looks as if she is seeing a ghost. Helena sneers to Liesl, “It’s been a long time.”

Nikolas Cassadine has officially broken up with Britt Westbourne for the umpteenth time, but this time looks like it may be the real deal. In the spoiler video for tomorrow’s episode of the ABC soap Spencer demands to know where Britt went from his father. Meanwhile, Britt confides in Felix that Nikolas is pressing charges against her for the part she played in Spencer’s kidnapping hoax. General Hospital spoilers already revealed last month that Britt Westbourne was exiting the ABC soap – perhaps she leaves Port Charles on the run, to avoid being arrested.

So GH fans, how do you think Sam Morgan will react when Cesar and Patrick reveal to her that Jason Morgan wasn’t technically dead and he was being held at Crichton Clark? What does Helena Cassadine have in store for Liesl? Is this goodbye for Kelly Thiebaud’s character Britt Westbourne? Let us know what you think in the comments below and don’t forget to check CDL tomorrow for more General Hospital spoilers and news.