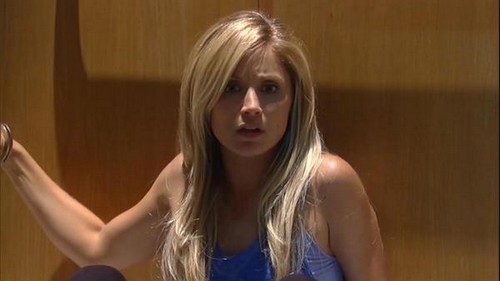 General Hospital Spoilers continue to be full of twists and craziness, but one particular plot thread has fans clutching their heads in shock. As we all know, LuLu Spencer is currently being held at the Chrichton-Clark Clinic with her husband, and her friends Maxie and Nathan. But Lulu is being held there for a specific reason, a reason that simultaneously shocks and grosses us out.

Before we get into that, let’s back track a bit and focus on some GH history. Victor Cassadine had put his relatives on ice [only on General Hospital, guys], but the frozen family members were brought back, including his nephew, the loony toons bananas-crazy Stavros Cassadine. You want a mental image of what Stavros is capable of? Think Javier Bardem’s character from No Country for Old Men combined with the Joker from Batman. Ok, maybe I’m being a teeny bit hyperbolic, but the guy is TERRIFYING.

Now, we know that the Cassadines were the ones who kidnapped Lulu’s mother, Laura Spencer, a long time ago. Laura was forced to marry Stavros, and they eventually had a son, Nikolas Cassadine. Now, Nikolas also happens to be Lulu’s step-brother, but will that play an important role in the show’s future? We’ll have to wait and see, but for now, we know that Lulu has been kidnapped and is being held at the Clinic. Why? Well, Stavros just STOLE one of her embryos! And not only that, but he fertilized it with his own sperm, and he’s planning on implanting the embryo back into Lulu so she can have his baby. Let me say that again – Stavros is going to implant his own step-daughter with his child! Ew, ew, ew, a million times ew.

Obviously, it’s not difficult to deduce that Stavros is absolutely obsessed with Lulu, a leftover effect from when he was obsessed with her mother, Laura. He wants to marry Lulu, and he wants her to have a bunch of his babies. Let me also just say – the actor who plays Stavros, Robert Kelker-Kelly, does a fantastically creepy job of playing psycho Stavros.

Anyway, Lulu’s mother Laura is currently in Paris to undergo her routine medical evaluations, and as such, she’s not there to stop her daughter from becoming Stavros’ wife/baby mama. But fans have been absolutely clamoring to get her back, since Genie Francis’ portrayal was a huge hit with the audience. Her Laura is a massive fan favorite, and it seems like a stretch to believe that she won’t be back to save her daughter from crazy Stavros. I mean, they have phones in Paris, don’t they? She’d have to find out that her daughter has been kidnapped by her ex-husband and forced into getting impregnated with his child. Plus, Laura’s probably the only person that Stavros is willing to listen to, considering his obsession with her and all. Is it possible that Laura will sacrifice herself for her daughter, maybe even trading places? Or will she just convince Stavros to let her daughter go without resorting to blackmail or sacrifice?

There’s also the question of what Nikolas Cassadine will do. I mean, his father is crazy, there’s no denying it. But will he try to save his sister from becoming his father’s wife? Ew, that sounds so horrible when you say it out loud. But the fact remains – Stavros is obsessed with Lulu, and wants to marry her. Can Laura and/or Nikolas prevent that from happening? Will they?