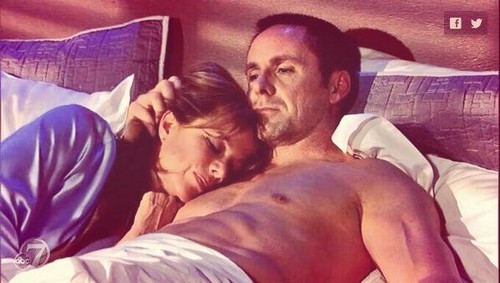 The 20th annual Nurses Ball is underway on General Hospital and so far we have already been surprised with a bizarre Cabaret hijacking, a strip tease, and a wedding. So, it’s safe to say the gala is definitely living up to GH fan’s expectations, and according to General Hospital spoilers it’s far from over.

General Hospital spoilers for the week of May 12-16 tease that Jordan and Shawn share a moment and more of their lives before Port Charles is revealed. However, TJ overhears Jordan on the telephone handling business, and is devastated, Molly spends most of the week trying to comfort TJ.

Alexis wants Julian out of the mob, once and for all. Considering the mess he has gotten himself into with Fake Luke, Julian Jerome is seriously considering quitting the family business. But, Fake Luke isn’t exactly ready to part ways, and will make it much more difficult to quit the mob than Alexis realizes. Julian Jerome is in way over his head!

During the week of May 12 Carly and Franco continue scheming to find evidence against Ava, even though the recording on AJ’s phone was botched- it is clear that Ava played a huge part in AJ Quartermaine’s death. The junior detectives set out to trap Ava, only they wind up discovering information in another unsolved Port Charles case.

The Nurses Ball 2014 features a very special guest as we learned on Frday, May 9. At the end of the show Lucy Coe, the MC, gets on stage and announces that Blackie Parrish will be performing. But sadly we know that John Stamos won’t be playing Blackie! Blackie is being portrayed by Ronn Moss this year – oh well, fans probably aren’t going to be to happy.

With all of the excitement over the Nurses’ Ball, we all almost forget that Dr. Obrecht had promised to hand over Lulu and Dante’s embryo, which she had held on to as a bargaining chip. According to General Hospital spoilers, Anna will have shocking news for Lulu and Dante regarding the embryo, and we will learn whether or not little Rocco will ever have a sibling.

So, General Hospital fans, now that Luke and Tracy are officially married, what do you think Fake Luke’s next move is? Do you think that Julian Jerome will make it out of the Port Charles Mob, or will Fake Luke continue to pull his strings? What kind of information do you think Carly and Franco discover? And, what about Dante and Lulu’s embryo? Do you think it is viable or did Dr. Obrecht play them and give them an embryo they can’t even use? Share your thoughts and theories in the comment section below and don’t forget to check CDL tomorrow for more General Hospital spoilers.

Sadly for Mr. Ronn Moss it seems most fans on Soap Opera Spy are NOT overjoyed that he is replacing John Stamos as Blackie Parrish even though it’s just for a stint at the Nurses’ Ball:

Here I was all excited that Blackie Parish was coming back and then I heard Ronn Moss was playing him and not John Stamos :(

Definitely disappointing but wouldn’t really expect John Stamos. Ronn Moss will do a great job. Y&R is losing people at an alarming rate. Maybe they should wait on recasting Jason. I actually would be very happy with MM. I like him better anyway.

I will not and I mean will not watch that part. That’s such a insult to Blackie and John Stamos!!!

I heard John Stamos turned them down

He did because he didn’t want to do it. But no one can play Blackie but John Stamos.

The whole point is that Blackie was a break out role for John Stamos, just like Demi Moore as Jackie Templeton. Would they have another actor trying to play Noah Drake and have him on stage singing “like” Rick Springfield???? No one in the current cast really had a tie to Blackie. DUMB!!!!!

There you go folks – I guess TPTB at GH dropped the Ball (pun intended) on this one!