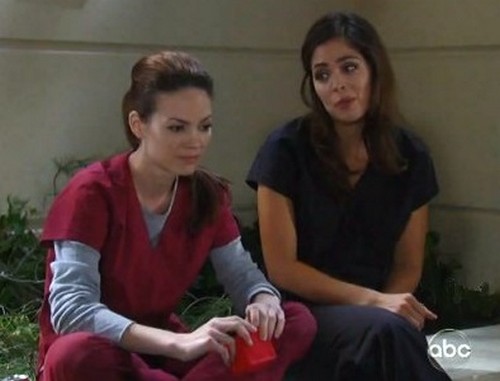 With all of the crazy drama in Port Charles these days, it is easy to overlook the love triangle developing between Nikolas Cassadine, Britt Westbourne, and Elizabeth (Liz) Webber. A General Hospital spoiler video recently revealed some serious rivalry developing between Britt and Liz, no doubt over Nikolas. Britt is determined to win him back, and Liz is getting in her way, there will most likely be a gnarly cat fight before the summer is over.

The Britt-Nikolas-Liz love triangle has been a long time coming. If you remember back to last winter when Britt and Nikolas were engaged, Liz threw herself at Nikolas and announced she was still in love with him and even asked him to leave his fiancée Britt for her, and Nikolas turned her down. Then, Liz’s ex Ric Lansing came to town, and Liz began spending time with him and was slowly getting over Nikolas. However, Nikolas soon found out that Britt had lied to him and stole his sister’s baby, so he kicked her to the curb and tried to get Liz back, it was too late though because Ric had already marked his territory. Now, Ric Lansing is dead (well, fake dead), so Liz naturally wants Nikolas again. And, so does Britt. What a mess!

At the end of the day, neither Britt nor Liz really deserve Nikolas Cassadine. Britt lied to him, and stole his nephew. That right there is grounds for never dating her again. Sure, Liz didn’t steal Nik’s nephew, but she is kind of a “fair weather girlfriend.” Liz only wants to be with Nikolas when she is lonely and can’t have him. If she loved him as much as she claimed she did, then she would have jumped at the chance to be with him, regardless of the circumstances, and instead she gave him the cold shoulder because Ric Lansing was back in Port Charles.