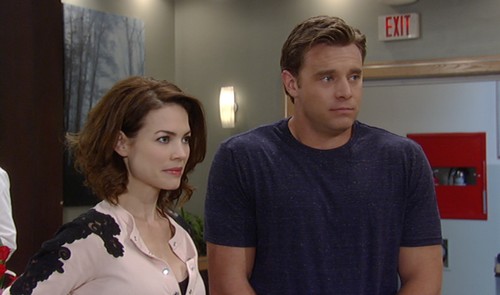 General Hospital spoilers tease that GH fans will not want to miss any episodes of the ABC soap during the week of November 17 – 21. Rumor has it there will be some more shocking revelations in Port Charles in the upcoming week. Right now several characters are locked up at the Port Charles jail, but according to General Hospital spoilers Sonny Corinthos may not be there long, because he is going to strike a deal!

Ironically, the police commissioner helped bring down Sonny and Duke (for lying for Sonny), Anna Devane has some of her own explaining to do. General Hospital spoilers tease that during the week of November 17 Anna has to finally come clean and fess up to “taking care of” Faison, and the fall out will be huge and could hurt her career. Rumor has it that Faison might not actually be dead, but no General Hospital spoilers have confirmed that theory yet.

In other General Hospital news, after their near death experience Shawn and Jordan decide to sit TJ down and tell him the truth about his father, together. Suring the week of November 17 GH fans can also expect to see the search for Ava’s baby continue, and Ava reaches out to Silas Clay for his help. After all if there is anyone who can get through to Nina and get the baby from her, it is probably Silas. Jason Morgan AKA Jake will also make some progress during the week of November 17 and as he moves in to Liz’s house he begins to have flashbacks to his old life.

So GH fans, everything seems to come with a twist – so what kind of twist will Anna’s involvement with Faison include? Is Faison really dead? What kind of deal do you think Sonny makes, does he rat someone else out? Let us know what you think in the comments below and don’t forget to check CDL tomorrow for more General Hospital spoilers and news.