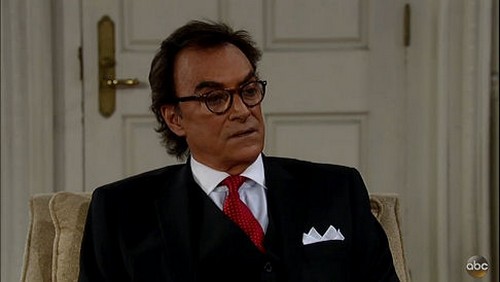 It really doesn’t come as much of a shock to General Hospital fans that Victor Cassadine is returning to Port Charles; he seems to be the key to two major unresolved story lines. Earlier this year, Cassadine whisked Dr. Robin Scorpio away with him so that she could unfreeze Helena, Stavros, and Jason Morgan. Rumors have been circulating for months that Jason Morgan will be returning to Port Charles, and Y&R alum Billy Miller has been hired to take on the iconic role. If Victor Cassadine is returning, perhaps that means he is bringing Jason Morgan back to PC with him?

Also, the last time Victor Cassadine was in Port Charles, it was revealed that he shared a sordid past with Britt’s scheming mother Dr. Liesl Obrecht, around the same time that fans were shocked to learn Liesl was also the mother of Det. Nathan West. General Hospital fans quickly began speculating that Victor is the father of Nathan. So, if Victor Cassadine is returning, that could also mean the writers are delving deeper into Nathan’s history and could be revealing that Victor is his father. If that is the case, then Nikolas Cassadine won’t be the only Prince in Port Charles.

So, General Hospital fans, why do you think Victor Cassadine is making an impromptu trip back to Port Charles? Do you think that it has something to do with Jason Morgan’s alleged return, or his maybe-baby, Nathan? Share your thoughts and theories in the comment section below and don’t forget to check CDL tomorrow for more General Hospital spoilers.

So how do fans of GH feel about the possibilities here? Check out what Soap Opera Spy readers have to say:

Love Thaao Penghlis. He’ll definitely be an asset to Pt Charles. I hope they give Michael a leading part . Especially with Sonny being gone. Billy Miller as Jason, wrong decision. MM would have been much better.

What does she mean “with Sonny gone”?

I believe he is taking a break to promote his wife’s movie.

I’ve got to figure out what’s going on. I love this cast and am about done with Y&R unless mm comes back.

Hopefully BM will be in PC very soon

The June 18 episode indicated that we might be seeing Jason back fairly soon – there were several hints as the comment above indicates. Do you think that Billy Miller has the job?