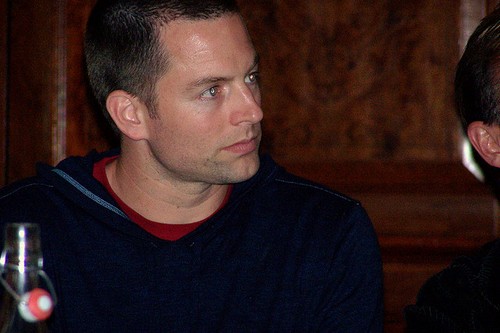 Michael Muhney’s loyal fans have been sitting on the edge of their seats waiting for news regarding his next project. General Hospital promises an exciting week where spoilers reveal that there will be lots of hot action. But sometimes the rumors that have been running rampant that the ex-Adam Newman will be following his fellow Y&R vets Michelle Stafford and Billy Miller over to ABC’s soap opera General Hospital cloud the important GH spoiler news. It’s not entirely impossible that Michael Muhney will be cast on General Hospital sometime in the future, but MM just tweeted he is working on a movie, so daytime TV doesn’t seem to be on his agenda at the moment nor something he is currently working on.

Any loyal Michael Muhney fan can tell you that MM is 39 years old, and would look foolish playing someone a decade younger than himself. Considering the fact that the GH just won an Emmy for their outstanding casting, the odds of them casting Muhney to play someone nearly ten years younger than himself, are slim to none.

So, if you see articles floating around the internet claiming that Michael Muhney is headed to General Hospital as Lucky Spencer, don’t take them to heart. GH star Rick Hearst (Ric Lansing) has tweeted Muhney a few times this Summer, but the rumors that Muhney and Hearst have been bonging on the GH set are completely ludicrous. With all of the scandal surrounding Michael Muhney, every major website would be reporting that he was on the General Hospital set working and filming, literally the second he walked through the door.

We’re not saying Michael Muhney couldn’t be cast to appear on General Hospital, we’re simply saying that of all the characters he could be cast as… it probably isn’t going to be Lucky Spencer. On a scale of 1-10 how hilarious do you think it is that people are claiming Michael Muhney is the next Lucky Spencer and is now working on the GH set with Rick Hearst? Feel free to express yourself with us in the comment section below and don’t forget to check CDL for all of your General Hospital spoilers.