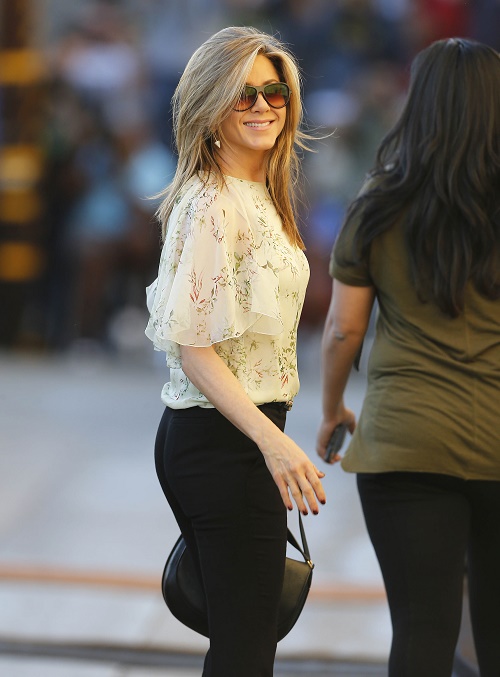 Jennifer Aniston and Justin Theroux might be headed for a breakup, according to some steamy pics of her and a new mystery man on the new cover of Allure Magazine. This is just one of the very successful moves in Jen’s long awards season campaign — but could it also suggest that Jen is getting a bit tired of her boyfriend, Justin Theroux, and is looking for some sexy excitement elsewhere?

Jennifer Aniston’s hard work a.k.a. master famewhoring definitely paid off in the long run, since she’s now firmly entrenched in awards season buzz. She’s managed to land herself a Golden Globe nominations, a Critics Choice nomination, and even a Screen Actors Guild nomination, putting her on the frontrunner list for Oscar nominations when they come out next month. Now, she’s done that with a slow and steady campaign that’s been all but invisible, except to people like us.

However, now that Jennifer’s given herself enough momentum to land the nominations, she’s going in for the kill. Jennifer is featured on the January cover of Allure Magazine, and she’s posing topless with a dude who is NOT Justin Theroux. Oh yeah, it’s just a magazine, it’s no big deal, whatever, right? Yeah, not so much. Justin Theroux might not care if Jennifer Aniston poses topless with some random dude on some magazine, but he should care about why she’s doing it. Jennifer, now that she’s landed the buzz, wants everyone to think that she and Justin Theroux are breaking up, largely so she can capitalize on it going into the Oscars.

See, there’s one of two ways she can play this – she can either get married to Justin Theroux, but since Brangelina and the Cloonmeister General got married earlier this year, she’ll look like she’s copying them. The alternative is to break up with Justin Theroux, which will provide her with just as much coverage, but much more sympathy and empathy from the audience – and… Oscar voters! See, it’s all a game. The Hollywood game of never-ending famewhoring.

What do you guys think? Will Jennifer Aniston and Justin Theroux break up? Let us know your thoughts in the comments below.