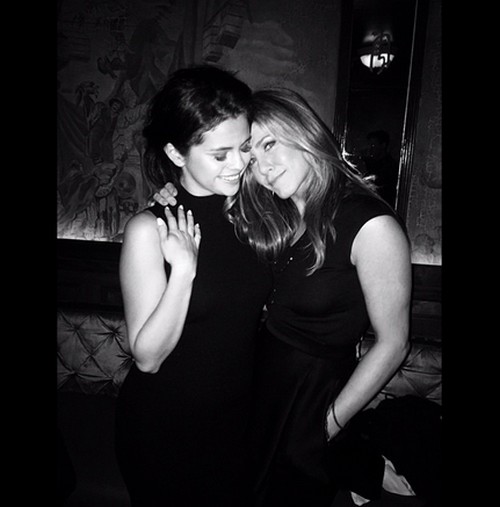 Jennifer Aniston’s desperation for an Oscar nomination is becoming more and more obvious by the day, and if we’re being honest, it’s not going to make her more attractive to Oscar voters. Her latest attempt at gaining awards season buzz has involved reaching out to the younger generation, via Selena Gomez. #DesperationCity.

Selena Gomez and Jennifer Aniston are both jilted America’s Sweethearts, so I guess they’d have something in common. Selena was present at a Cake screening at the Chateau Marmont, and I suppose Jennifer talked her into joining her unofficial PR team. Selena decided to upload a picture of her posing with Jennifer Aniston, with the caption, “I have not only been following her career as a fan since I was 8 and now get to watch her completely transform in her new movie CAKE, I have gotten to have real conversations with such a real heart, made my entire year. #cake #goseeit.”

As Lainey Gossip mentions, that’s 19 million followers that Selena Gomez has on her Instagram that are now being told to go watch Cake. Granted, Cake isn’t exactly a feel-good teen movie of the year, nor does it have any love triangles, sparkly vampires, dystopian battles to the death, or anything else that seems to appeal to teenagers this day. I’m not exactly sure if Selena’s Instagram followers are the demographic that Jennifer Aniston should be chasing, especially if she wants real awards buzz to come out of this. Then again, what difference does it really make? Jennifer Aniston ain’t getting an Oscar nomination for this, even if she manages to pull off a Golden Globe nomination.

What do you guys think? Will Jennifer Aniston get an Oscar nomination for ‘Cake’? Or will her increasingly transparent attempts at gaining Oscar buzz fall apart? Let us know your thoughts in the comments below.