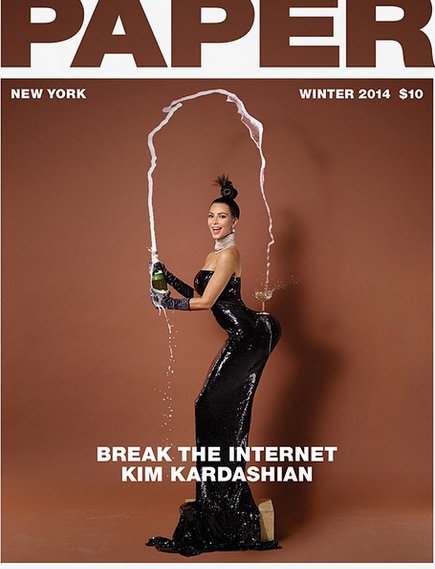 Jennifer Aniston appears to be taunting reality star Kim Kardashian after the latter posed for “Paper” magazine in an attempt to break the internet with her butt baring photo. So technically, in 1996, you could have seen a more believable heiney for the sum of around five bucks. Would Jennifer Aniston slam Kim Kardashian over bare butt pics?

What made Kim’s photo shoot for “Paper” so insane was that her pictures for the publication were so unbelievably Photoshopped that they were just laughable. You can’t tell me that Kim’s waist was really that tiny while her butt was so gargantuan – it’s just not natural. In addition, she has admitted to having Psoriasis and cellulite on her butt region in the past, so why cover that up?

She said that she was proud of her post-baby body and did the photo shoot with the magazine for herself, so why be ashamed of all of her flaws? It’s not like those who have eyes can’t tell that the magazine was lying about saying that the curves all belonged to Kim. Certainly, they slimmed her waist down and did some image editing magic for her champagne shot.

Still, it’s obvious that the queen wearing the crown of the nude photo shoots for magazine covers is still Jennifer Aniston. Jennifer did her shoot back in 1996 while Kris Jenner was still plotting on a sex tape release to make her prettiest daughter famous.

While at the premiere of “Horrible Bosses 2” on Thursday, Jennifer threw some shade at Kimmy K. for thinking that she was the first to achieve a nude photo on the cover of a magazine. She said that her nude butt appeared in public way before Kim’s. She revealed, “Oh, way, yeah. I was an original.”

She went on to say, “[Mine was just innocent, there’s nothing aggressive about that. Sorry, Kim K.”

Who do you think had the better magazine cover? Hit the comments and have your say!