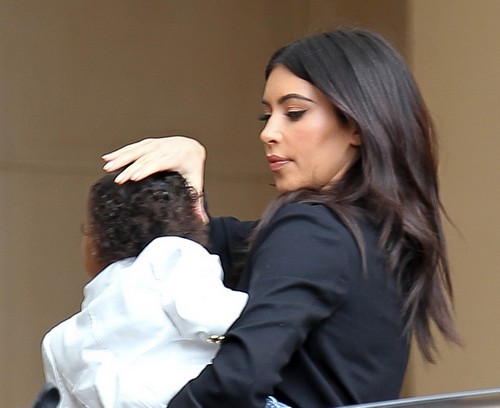 Kim Kardashian and Kanye West are nearing divorce following Kim’s recent trip to see a divorce lawyer according to recent reports. Now we read of fighting and disagreements over how to deal with their child, North West. Kanye West and Kim Kardashian probably have very different parenting styles, but according to a recent report, their differences in opinion are starting to cause issues between them. A report from the National Enquirer claims that Kanye West used corporal punishment on North West, and Kim Kardashian lost her shit at him. As IF Kim Kardashian would ever ‘lose her shit’ at Kanye West. Does she want to be fired from being his wife? Because if she continues giving Kanye crap for doing what he wants to do, Kanye will not hesitate to find a new wife.

Anyway, the Enquirer’s source claims that a witness saw Kanye repeatedly tapping North on the hand and giving her instructions not to do something, and then Kim apparently started screaming at him. The source explains, “Kim got furious with Kanye and triggered a screaming match — with him raging that she’s too permissive and lax about telling a child what NOT to do. Kanye’s adamant that ‘a child’s got to be schooled!’”

Well, let’s just say I believe that Kim would ever stand up to Kanye for anything. Lightly tapping a child on the hand is NOT corporal punishment. I lightly tap my niece on the head all the time, but I do it in jest and affection. Kanye doing the same thing to North wouldn’t even constitute physical abuse, so this just seems like a small matter being blown out of proportion. Then again, who really knows what happens in the Kardashian household? The only thing I know for sure is that Kim Kardashian probably doesn’t even raise her voice to Kanye West at home, much less in a public place.

Do you guys agree? Or do you think the whole report is hokey? Let us know your thoughts in the comments below.