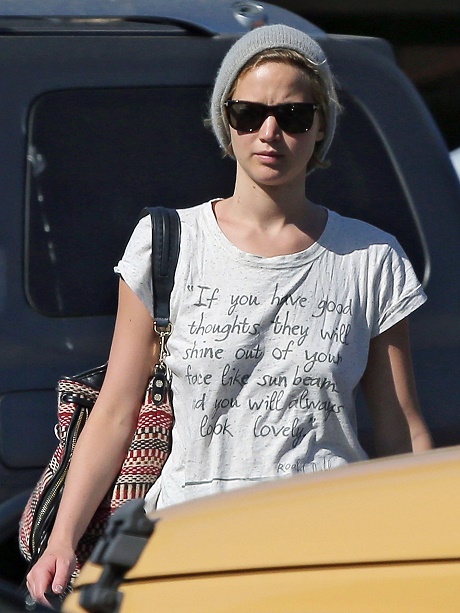 The Jennifer Lawrence and Chris Martin dating hooplah just heated up, as Jen’s grandma leaked news that the couple would be spending the holidays together! Jennifer Lawrence’s grandmother just leaked the biggest JLaw story since the nude scandal broke. Jennifer Lawrence and Chris Martin began dating only a few months ago, but a dating update is often required! They’ve quickly become one of the most sizable tabloid draws despite their reluctance to get photographed. As such, Jennifer’s grandmother is probably going to be in big, BIG trouble with the Lawrence family after they found out what she did.

Carolyn Koch, Jennifer’s grandmother, decided to speak to the Daily Fail about Jennifer’s Christmas plans, inevitably letting slip that Chris Martin would be spending it with them in Louisville. If that wasn’t bad enough, Carolyn also confirmed that Jennifer’s mother, Karen Lawrence, had flown to LA to meet Chris, which confirms that this relationship is a lot more serious that anyone initially suspected.

Carolyn told the Mail, “Jennifer’s mum flew to Los Angeles to meet Chris. We will have to get another chair for the dinner table at Christmas. The family is getting so big we might have to split up for gatherings.”

Um, what about Chris’ children? And his ex-wife? Just because he has a hot new girlfriend doesn’t mean he can give up his responsibilities as a father, right? IF this is true, Gwyneth Paltrow’s going to be very, very angry. Not only is he ditching her for a more popular mini-me version [in her mind], but now he’s abandoning their children and jetting off to Kentucky to spend time with Jennifer’s family? Ouch.

Plus, I can’t imagine how Jennifer’s ex-boyfriend, Nicholas Hoult, reacted to this news – especially since he was the one getting all the family dinners and vacations while dating JLaw. I don’t think he was happy about it, even if he’s ‘moved on’ with Kristen Stewart.