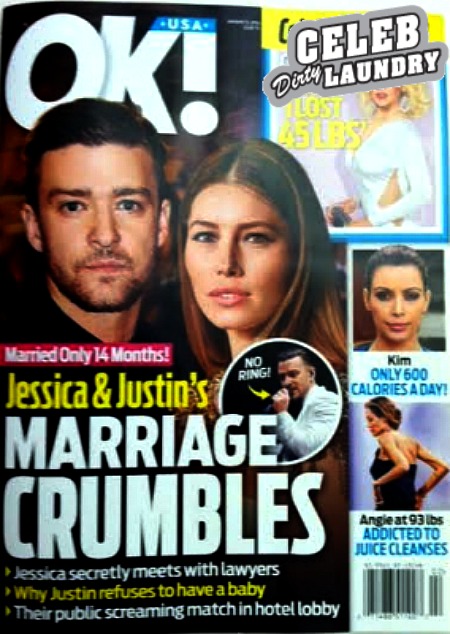 Justin Timberlake and Jessica Biel seem to have hit a bit of a rough patch, if the latest cover story of OK! Magazine is true. According to the report, Jessica and Justin’s relationship hasn’t been smooth sailing for the past two years, with the couple constantly fighting over every aspect of their relationship. The report claims that Justin and Jessica are now living apart, and getting ready to divorce and make their split permanent.

A source tells OK!, “Justin and Jessica are battling over his long tour absences, his refusal to start a family — and his alleged liaisons with other women. Even though he says he hasn’t cheated, she is very suspicious and wants to know what she can use against him in court if it comes to that.”

Apparently Jessica has already hired a divorce lawyer, and even though it’s ‘breaking’ her heart to proceed, she’s getting ready to move on, once and for all. I mean, Justin’s rumored infidelity is nothing new. He was alleged to have been spotted kissing a local actress while in Rio in September, and that’s only what’s been reported. Who knows how many haven’t even been publicized or written about.

The source also adds, “Before they wed, Justin promised Jessica they’d try for a baby. But then he decided to put his energy into touring. Jessica can read between the lines, and it’s breaking her heart. She feels like a widow, and one of her closest pals said she was the ‘loneliest housewife in Hollywood.'”

There’s also the fact that Justin and Jessica don’t make public appearances together anymore. Jessica claims everything’s just fine, and sure, it could just be Justin wanting the limelight to himself, but it certainly seems odd. I don’t know how unconventional their marriage is, and I’m not an expert on Hollywood relationships, but isn’t it norm to bring your significant other along during momentous occasions in your life? Or maybe Jessica is pregnant, and just trying to keep it from the media?

What do you guys think? Will Justin and Jessica stay together? Even if OK! claims that Jessica is ready to file for divorce, I don’t think Jessica is willing to give up her status of JT’s wife just yet. She knew all this about him going into the marriage, despite what the tabloids claim, and she won’t give up so easily.