John Stamos Reveals Full House Reunion, Admits There Will Be A ‘Twist’ 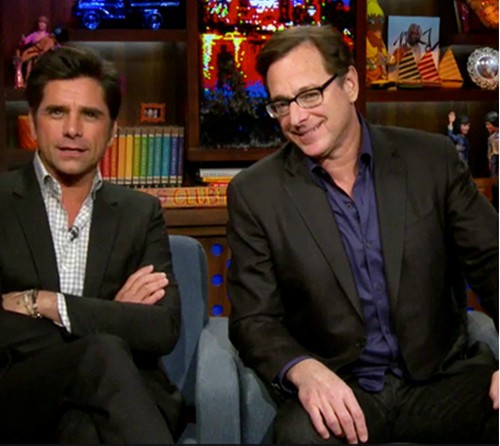 Talks of a Full House reunion have been rampant for a few years now, but John Stamos finally confirmed that a sequel will be happening, one way or another. The stars of Full House were all guests on Watch What Happens Live, and John revealed, “We’re sort of working on a twist on a sequel, but we don’t know if it’s going to happen yet or not.”

Well, if all of them are interested in the reunion, I don’t see any way that it’s not going to happen. Fans are still clamoring to see a reunion between the Full House stars, just like they’re clamoring to see a Friends reunion. The difference is that most of the Friends stars have absolutely no interest in getting back together, even for one episode, whereas all the stars of Full House seem like they’d be committed to giving the fans at least one more hurrah, not counting the weird mini-reunion for that Superbowl commercial. Well, all the stars except for Mary-Kate Olsen and Ashley Olsen.

Both the sisters have been conspicuously absent from any Full House related events or interviews, and with both of them expressing their interest in distancing themselves from acting careers, I doubt we’ll see them in this reunion or sequel.

Also, I have to say – why is John Stamos not more popular? That guy is seriously the epitome of charm, and he’s also a great interview. On Watch What Happens Live, he jokes about hooking up with Demi Moore on General Hospital, and also explains why he never dated Lori Loughlin, who played Aunt Becky on Full house.

Anyway, it’s good to hear that a Full House reunion is in the planning stages, and let’s hope that it actually comes to fruition.