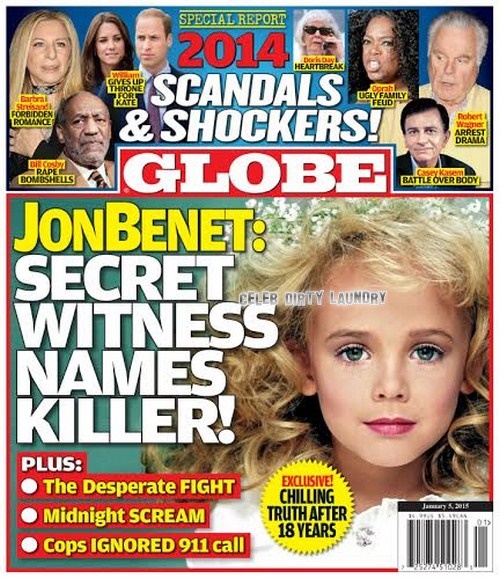 In the newest issue of GLOBE Magazine, some of 2014’s biggest celebrity scandals and shockers take center stage. The magazine reports on a variety of the year’s juiciest, most talked about Hollywood jawdroppers, including the Bill Cosby rape scandal, the fight to recover Casey Kasem’s body after his death, and Barbra Streisand’s forbidden romance! Other stories featured in the special report concern Prince William and his royal duties, namely his alleged willingness to “give up the throne” for Kate Middleton; Oprah’s ugly family feud; and Robert Wagner’s arrest drama.

While this edition of the mag contains some sparkly, intriguing bits of gossip that have notoriously peppered media outlets this past year, Bill Cosby’s scandal continues to be one of the biggest in Hollywood. This past year, countless women, including models Janice Dickinson and Beverly Johnson, have come forward with stories detailing their sexual assaults (or other inappropriate encounters) with the famous comedian.

Cosby’s camp has said the allegations are baseless and shouldn’t be taken seriously, but with more and more individuals coming forward, people are finding it hard not to believe some, if not all, of the accusations. What do you make of Bill Cosby being accused of so many acts of sexual assault?

Following the magazine’s current theme of scandal and shocks, the January 5 edition of GLOBE revisits a horrible happening that just might be the biggest scandal in popular media to date: The unsolved JonBenet Ramsey murder. This current edition of the magazine claims to report the identity of the killer — named by a mysterious new witness — and promises a “chilling truth after 18 years!”

Be sure to pick up a copy of the magazine as soon as you can!