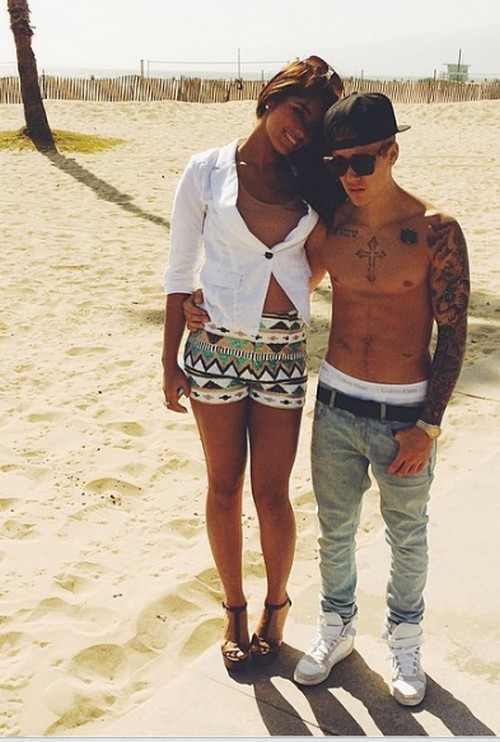 Justin Bieber is going through girls faster than he’s going through his arrests, and that’s saying something. He was with Selena Gomez at Coachella not two weeks ago, but he’s already moved on from Selena, first to Kylie Jenner, then Kendall Jenner, and now another unknown model named Yovanna Ventura.

For some reason, these women are able to look past Justin’s ridiculous clothing and spoiled brat demeanor, likely because they’re looking to boost their fame in any way they see fit. Even if Justin is a douche of the highest order, hanging out with him has given Kylie and Kendall quite a lot of attention – and when you’re a Kardashian sister, you don’t need any more reasons than that.

However, has Justin already gotten sick of Kylie? There were rumors that his, ahem, ‘flirtation’ with Kylie overlapped with his time spent with Selena, and that’s the reason that Selena dumped him and got rid of all of them on Instagram. But it’s just a week later, and both Kylie and her sister have now been jettisoned in favor of this model, Yovanna Ventura.

There’s not much known about this Yovanna person, except that she’s 18 years old and a model – and she posts tons of photos on Instagram, usually showing off her body or posting pictures of her hanging out with famous people. There’s tons of photos – both on Justin’s Instagram and Yovanna’s Instagram – showing the both of them spending time together.

Basically, she’s pretty much exactly Justin’s type, in that she’s very attractive and doesn’t seem to care that she’s being used. But the real question is – why did Justin dump Kylie so quickly? He usually goes through his ‘relationships’ for at least a few weeks before moving on, and I would have thought that Kylie would last for at least a month. However, sources tell us that Justin’s trying to stay away from the famewhore-y Kardashians for now, especially Kylie, because of his legal troubles. He can’t afford to get into any more trouble with the law, and can’t risk having sex with Kylie for that reason.

But then again, when has Justin ever really followed the law? Of course, he finally has people advising him right now, but how long will his penchant for staying out of trouble last? Not long, I’ll bet.