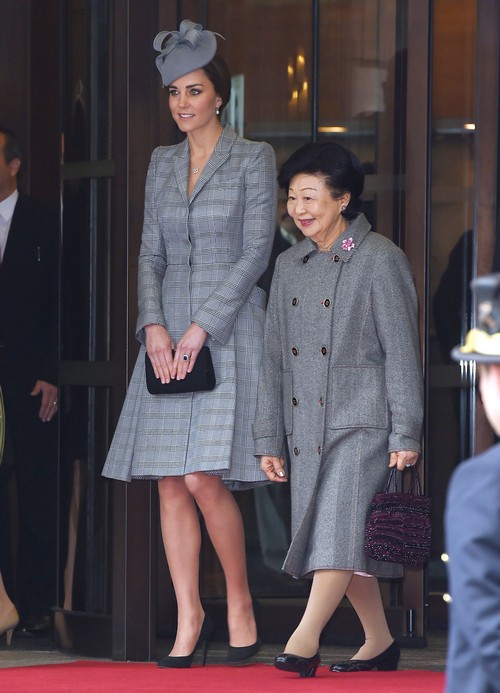 Kate Middleton is out and about now that she is feeling better but she still faces pressure over choosing her baby girl’s name. Kate Middleton sneaked a visit to the doctor last week after hiding away at her parents’ home for days, and she and Prince William got some happy news: Princess Kate is likely going to give birth to a baby girl in April 2015! However, having a daughter also raises some complications for them, since they now have several family members vying for the honor of having the ‘spare’ named after them.

We already know that Queen Elizabeth wants the baby daughter to be named after her late sister, Margaret. Or at the very least, the Queen will want the baby to be named after herself, Elizabeth. However, we’re hearing exclusively that after the royal family found out that the baby would be a girl, Camilla Parker-Bowles began pressuring Prince William and Kate Middleton to name their baby daughter ‘Camilla’. Seriously, the nerve of her, no?

Prince William, for his part, wants to name his daughter Diana, after his late mother. Kate, on the other hand, probably wants to name her daughter something flowery and original, and in no way related to the royal family. And Queen Elizabeth, bless her heart, will want a royal, aristocratic name for her great-granddaughter. Meanwhile, Prince Charles will probably be sucked into the baby name drama, especially since Camilla Parker-Bowles will undoubtedly coerce him into trying to convince Kate and Will to name their daughter Camilla.

In the end, who will win? The Queen and Prince William will probably be furious at Camilla’s arrogance, since she’s not exactly bosom buddies with Kate, you know? But that’s not to say that a Kate Middleton – Camilla Parker-Bowles feud will stop Camilla from getting what she wants, even if she has to resort to underhanded methods to make it happen.

Kate Middleton out and about at last!