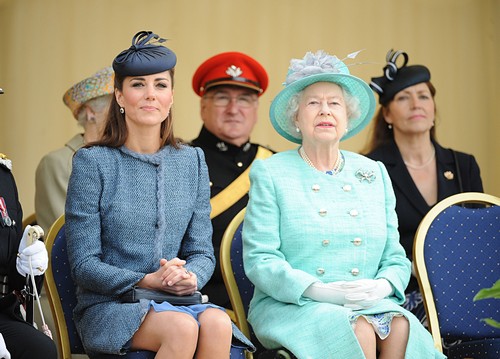 We have been inundated with unsubstantiated stories about Kate Middleton being pregnant and even miscarrying – some tabloids having even cooked up tales about Kate Middleton having clashed with Queen Elizabeth over parenting Prince George. But all of this is nonsense and in no means that The Duchess of Cambridge doesn’t love Elizabeth and appreciate the great matriarch and guidance she has given her. In fact it’s just the opposite – Queen Elizabeth is the member of the royal family that Princess Kate is the closest to aside from her husband Prince William and buddy Prince Harry.

Things may get tense at times, like when Kate get’s photographed half-naked, but the love is still there and Kate realizes that after the 88-year old monarch dies she will have few family members really in her corner. Kate and Prince William are trying to get pregnant now – as they have made clear since their trip to Australia and New Zealand, so Queen Elizabeth’s support is more important than ever.

It’s that bond that makes it difficult for Kate to accept that Elizabeth’s life is quite obviously winding down. According to the Aug. 25th print edition of GLOBE Magazine Queen Elizabeth called Kate before The World War 1 Memorial Event at the Tower of London earlier this month and confessed that her health has deteriorated even more. Apparently Elizabeth’s medical team has once again suggested that she cut back her royal duties due to her failing health. Instead of public appearances the queen has been ordered to rest her failing body and it’s a decision that she has made peace with.

Realizing that Elizabeth’s life is dying, that her health is failing, has devastated Kate for a few reasons. First she can’t bare the thought of losing someone so close to her husband and she also hates knowing that Prince George will achieve a sense of greatness and the queen won’t be around to see it happen. Kate is said to be simply drained by all of the ongoing stress and she knows that there isn’t really an end in sight to any of it. The only way to get through it is straight down the middle and that means having to support The Queen while coming to terms with the fact that she’s going to lose the monarch soon.

What kind of job do you think that Kate is doing in terms of keeping it together? Do you think that Elizabeth is proud of how well she holds up under pressure? Tell us in the comments below!