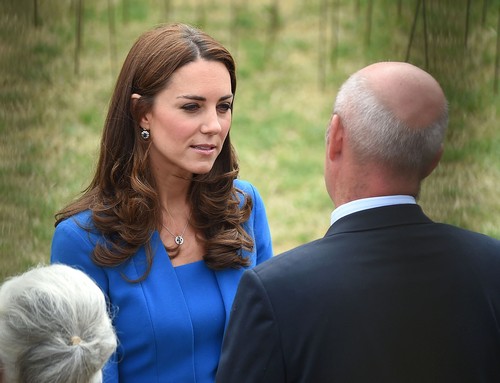 Pregnant Kate Middleton is feeling fine now that her morning sickness is gone but The Duchess of Cambridge doesn’t want the world to see her looking plump and that is why she is in hiding, cancelling her royal duties. Although the vain princess’s morning sickness is over she is using it as an excuse to avoid the camera. Weight gain, her growing baby bump and her face getting bloated are the real reason for her cancelling her royal duties. Camilla Parker-Bowles called Kate lazy and entitled but she left out vain. Kate Middleton had an excellent excuse for being absent from her public commitments for the last two months – she had Hyperemesis Graviadarum, otherwise known as the world’s worst morning sickness for pregnant women. But it’s been almost a month since she went AWOL and was confirmed as pregnant for the second time, and most sources at the time claimed that she was nearing her twelve week mark.

We already predicted Kate’s due date to be in April of 2015, which would mean that she’s at least two months pregnant, right? So while Kate might not be fully recovered from the illness, she’s certainly not dealing with the same intensity as she did the first time around. It was so bad that she was forced to go to the hospital last time, but this time, she’s been able to receive treatment at Kensington Palace. While that indicates that they were better prepared to deal with Kate’s health issues this time, it also hints that she’s in a better position than some people suspect, right? I mean, she and Prince William were actually able to step out a couple of weeks ago, and although Kate looked like hell in the candids, she had enough energy to wear her outside clothes and actually venture out in public. Plus, Hyperemesis Gravidarum is not debilitating, and it’s certainly not crippling past the first trimester of a woman’s pregnancy.

No, some sources are being so bold as to say that Kate Middleton is just avoiding her public duties because she’s vain. She’s starting to gain weight from her pregnancy, and just as she avoided the spotlight like the plague when she was pregnant with Prince George, she’s shying away from the media focus this time around as well. I mean, there’s a reason she wanted to move to Anmer Hall so much, and a large part of that was because Norfolk is remote and is very difficult for the paparazzi to access.

Plus, if we’re being harsh and realistic, Kate’s just lazy. The entire royal family is lazy so we’re not just singling her out, but she hates doing work – and to her, making public appearances is work – and when she is plump it is painful work. This just gave her a great excuse for missing all these public appearances without insulting anyone or causing an international incident.

Of course, Camilla Parker-Bowles has already called Kate out on her laziness, and what does she get for her bluntness? Why, she gets banned from having anything to do with Kate’s second pregnancy. I mean, she barely has any interaction with George, but Kate’s had enough of Camilla’s bullying and has put her foot down – no matter how accurate Camilla may be.