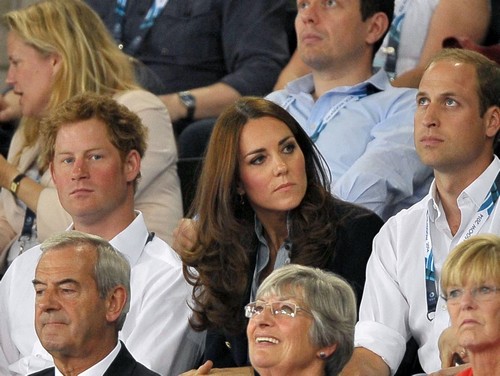 Well, we can say one thing about Kate Middleton: she’s not hiding the fact that she’s pregnant. Instead, she’s embracing it fully and completely, even stepping out in public. She’s probably realized that there’s no way to avoid the rumors and stories, and short of confirming it themselves, there’s nothing they can do to stem the flow. As such, she’s stopped caring about the paparazzi and photographers, and has just decided to go with it. Of course we know that GLOBE reports that Kate has had a miscarriage and that has certainly not been ruled out. We are all awaiting an official Palace announcement to clear up the situation.

Kate, Prince William, and Prince Harry all attended the gymnastics during the Commonwealth Games in Glasgow today, and it was extremely obvious that there was something different about Kate’s face. She’s been looking more bloated in recent public appearances, but nothing compared to his. Her face looks completely different, fuller and rounder than it ever used to look – even during Prince George‘s pregnancy. However, she rarely stepped out during the later months of George’s pregnancy, so for all we know, this is how she looked then.

If that’s the case, then Kate might be further along than we initially imagined. Is it possible that she’s actually well into her second trimester? I mean, Prince William has admitted that he and Kate are trying, and everyone close to the royal couple has corroborated the story. Plus, the palace PR people aren’t going out of their way to deny the rumors, even though they used to last year. So yes, we know that they are 100% planning for the spare sometime next year. But if Kate’s weight gain and face changes are any indication, that pregnancy has already happened.

Do you guys agree? Is Kate pregnant with the ‘spare’? Let us know your thoughts in the comments below.

Prince Harry, Kate Middleton and Prince William attend the gymnastics during the Commonwealth Games on July 28, 2014 in Glasgow, Scotland.

Kate Middleton, (Catherine, Duchess of Cambridge) visits Sports Aid in Glasgow, Scotland on July 29, 2014. Kate posed for pictures with children before an interview. Is Kate holding a baby bump?