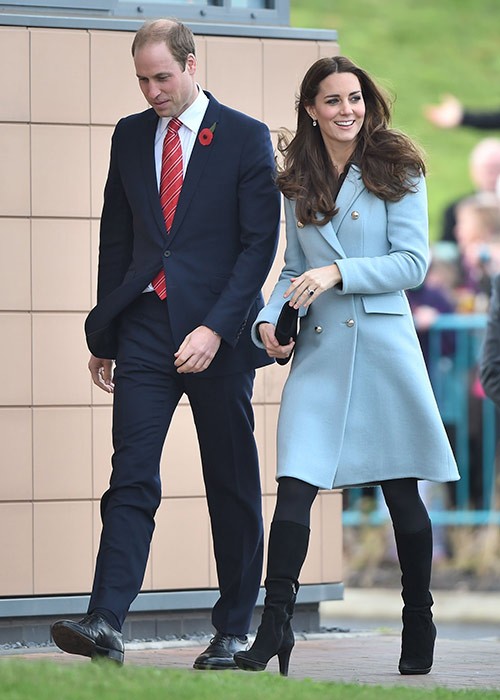 Queen Elizabeth should probably be credited for finally wearing Kate Middleton and Prince William down and bringing them back together. After all, an 88-year-old monarch with an expression to rival Grumpy Cat’s should always be taken seriously, no matter the occasion. Plus, Kate Middleton and Prince William not living together is bad for the royal business, and Queen Elizabeth is nothing if not a family woman. It’s too bad that most of her kin doesn’t share her views on marriage, monogamy, and commitment, but at least she’s there to force them to toe the line when it becomes necessary.

Anyway, Kate Middleton and Prince William are currently on their Queen-sponsored babymoon to Balmoral, likely in a last-ditch attempt to bring Kate back to Kensington and get the disquieting rumors of a Kate Middleton/Prince William divorce off the table. And when they come back, Kate will go right back into making public appearances, making up for the one month of lost time when she was sick with Hyperemesis Gravidarum and puking her guts out every morning.

Kate Middleton is now around fifteen weeks pregnant with her child, and going into her second trimester. However, that means that her morning sickness has calmed down, and the Queen is kicking her off Kate-And-Will-Are-Happy-Together tour for the next few weeks. Kate will make her next appearance at the Wales-Australia Rugby match in Cardiff, along with her loving hubby, Prince William, by her side. Then, they will visit the Valero Pembroke Refinery in South West Wales, and that’s just the beginning. After that, Kate and Will proceed to attend the Remembrance Sunday commemorations in Whitehall, along with members of the royal family. In other words, there’s no respite for them, and it’s becoming very obvious what the Queen is doing. Whether their Balmoral trip goes well or not, the Queen is making sure that Kate and Will are forced into spending time together so she doesn’t go back to Bucklebury. Will it work? Only time will tell.

Update: now that Pippa Middleton has agreed to take a job at NBC on the Today Show as a correspondent for Lifestyle and Health features, about which she knows absolutely nothing as has been noted in her previous writing assignments, the royal family is in an uproar. Everyone in the palace realizes that NBC hired Pippa for only one reason, her family connections (sort of like Chelsea Clinton). Kate Middleton and Queen Elizabeth are especially upset by what they see as Pippa’s betrayal. One side effect of this new ‘job’ for Pippa is that it will drive Prince William and Princess Kate back together in a circle the wagons sort of way.