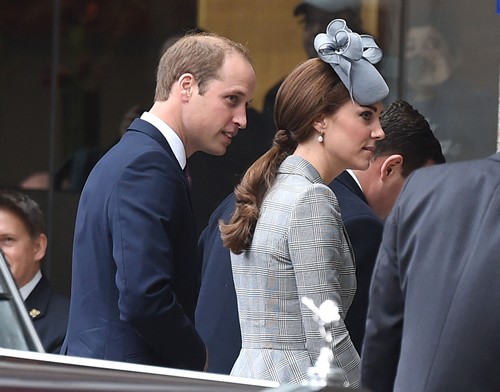 Kate Middleton has been living separately from Prince William for weeks. While Prince William is living at his home at Kensington Palace, Kate Middleton is staying at her parent’s Bucklebury property despite the fact that her health is better and she looks great. There is no medical reason that the future King and Queen are not together now as anyone who saw the photos of a very healthy looking Duchess of Cambridge can attest. A Natural question arises: are Kate and Will fighting, are the royal couple in the midst of a trial separation? If Kate really loves being with her mom, Carole Middleton, while she’s pregnant, then she could certainly have her mother stay with her at the palace, no?

Why in the world is Kate Middleton staying at her mother’s home when she could be living with Prince William at Kensington Palace, being waited on hand and foot by the royal staff? Kate has finally stepped out in public this week, making several official appearances in London with Prince William. She looked healthy and glowing and showed only the tiniest glimpse of a baby bump, and she told all the reporters that she was happy to get out of the house. Except, she never addressed exactly WHY she was still at the ‘house’, and not back at the palace. We ask the question: are Prince William and Kate Middleton fighting and having a trial separation?

Initially, when Kate was still dealing with the morning sickness, it made sense that she would want to be with her parents – especially since Prince George came to stay with her, and his nanny as well. And you know, we just assumed that Prince William was visiting her as often as he could, considering his own busy schedule and all. Except now that Kate is doing better – and in her own words, she IS doing better – why is she still at her Bucklebury home? Kate Middleton and Prince William are almost living as though they’re separated, checking in for their son’s life and royal engagements, but not actually ‘living’ together. I’m not saying that anything’s going on, just that there COULD be something going on.

Anyway, Kate Middleton and her baby bump cover the latest issue of OK! [UK version], and the report focuses on how Kate made three public appearances in one week with the implication of how well she is doing. And by Kate’s standards, that’s like a year of regular people work. You know she’s feeling better when she’s making that many public appearances, although I suspect that a lot of it had to with royal pressure. But I still want to know why Kate and Will haven’t gone back to living together, and I suspect I’m not the only one curious about this.

Don’t get us wrong here – we are not saying that Kate Middleton and Prince William have separated, but it is worthy of note that Will’s parents divorced in a scandal that almost brought down the monarchy, Queen Elizabeth’s late sister Princess Margaret and Lord Snowden divorced, Will’s uncle and aunt, Prince Andrew and Princess Anne, have both divorced… so let’s be serious here, anything is clearly possible with the British Royal Family.

Update: Prince William is trying to convince Kate Middleton to forgive him and move back to Kensington Palace with his son, Prince George. The Prince has flown his wife and son to Scotland on an babymoon to help end the trial separation that saw Kate living at Bucklebury with Prince George while Will was stuck alone at Kensington. According to The Sun Kate and Will jetted off to Scotland this week to enjoy a bit of a vacation but our sources assure CDL that the reason for the trip is for the royal couple  to attempt reconciliation.