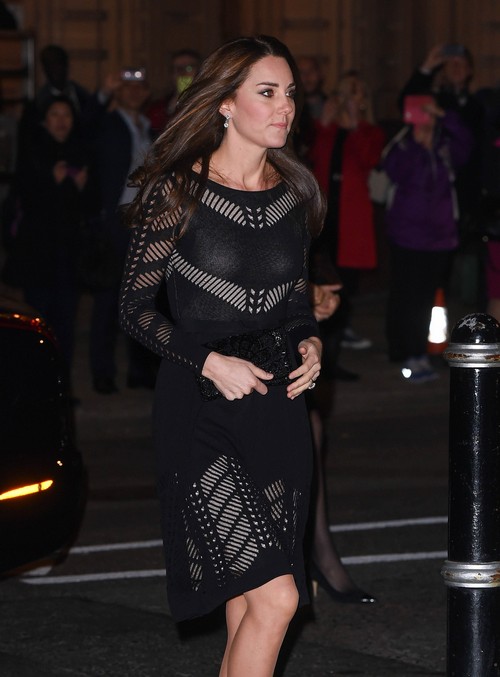 Kate Middleton attended the Action on Addiction Autumn Charity Gala Thursday October 23 alone, without Prince William, fueling rumors that the royal couple are still fighting. The Pregnant Duchess of Cambridge looked amazing and didn’t hide her barely visible baby bump wearing a black knee-length Temperley flare dress at the event. The dinner was hosted in London at L’Amina restaurant and Kate looked even better than she did at her previous official appearances on Tuesday.

Kate Middleton made her first public appearance since announcing her pregnancy, welcoming the President of Singapore and his wife at London’s Royal Garden hotel earlier this week with Prince William. The chatter surrounding her health has died down a lot, largely because Kate looked fantastic during the appearance. She looked healthy, she was glowing, and she was the picture of a pregnant women in her first trimester – with no signs of Hypermesis Gravidarum or morning sickness. Now, I’m sure the makeup and clothing covered up any  lasting signs of sickness, but the point is that Kate Middleton is all better. And you know what that means?

If Kate Middleton is doing significantly better, then why is she still at Bucklebury? According to reports, she has yet to return to Kensington Palace, although we can’t verify that yet. But Kate did NOT hint at going back home to Prince William when she mentioned that she was looking forward to ‘getting out of the house‘, which we know is her parents’ Bucklebury home which has been her refuge from her husband since the fighting rumors started over the last couple of weeks.

Exclusive sources provided an update and unfortunately tell us that Kate Middleton and Prince William are still fighting, and that Kate didn’t want to return to Kensington Palace just yet. Sure, the royal couple just made two public appearances together earlier this week, and were the picture of a loving and dedicated couple, but they’re also pros at this – they have had years and years of practice, and I’m sure they can turn on a fake smile and pretend for the cameras.

No, if Kate’s not going back to Kensington and Prince William even after her health has clearly improved then I have to wonder if there’s other reasons for her isolation. It could just be that she doesn’t want the media speculation surrounding her, which is bound to happen if she spends more time in London. She could be worried about that rumored palace spy or simply enjoying being back at home in Bucklebury. Or she could be fighting with Prince William.

Catherine, Duchess of Cambridge attends the Action on Addiction Autumn Gala Evening at L’Anima without Prince William on October 23, 2014 in London, England. FameFlynet