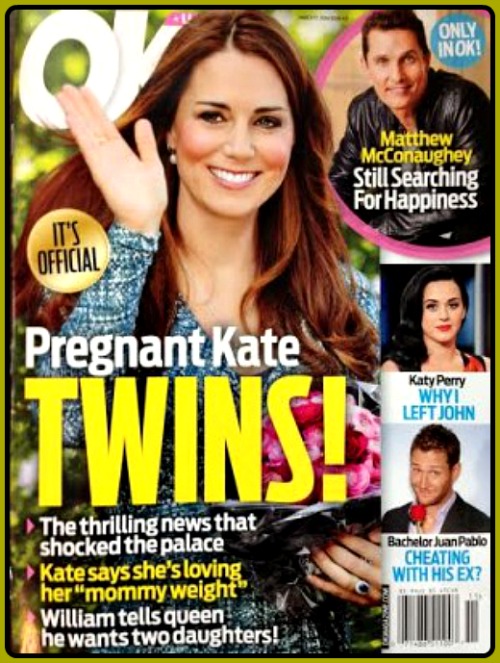 The latest cover issue from OK! Magazine claims that Kate Middleton is pregnant with twins and showing the new baby weight, which now makes it the third or fourth time OK! has alleged this same story. Come on, all we’re asking for is a little imagination here. Maybe change it up, say that Kate is pregnant with triplets, or even boy/girl twins!

Anyway, OK!’s story states that Prince William and Kate are expecting twins, with a source adding, “Wills told the queen he’d love to have at least two daughters. With all the boys in his family, he really wants to even up the balance. William and Kate have made no secret of the fact that they’d like three children together.”

Well, short of a scientific miracle, there’s no way Will and Kate can guarantee that Kate will give birth to twin girls – unless they go for adoption, which I don’t see the royal family allowing. However, it’s certainly true that Kate and Will do want more kids, something that they’ve admitted to in the past. In fact, [legitimate] sources close to the royal family have confirmed that Kate and Will are getting ready to try for another kid, and that’s one of the reasons they were in such a rush to find a new nanny for Prince George. In fact, their plan is that their nanny will stick around for their next kid as well, which they’re hoping to have within the next two years.

So while Kate and Will are definitely interested in having another kid, there’s really no guarantee that they’ll be twins. Sure, they may want to have twins, but that doesn’t mean it’s going to happen. Also, even though OK!’s cover story claims that Kate’s pregnant with twins, the actual report states that Kate only wants twins, not that she’s actually pregnant with them.

There’s also a feature on how Matthew McConaughey is ‘still searching for happiness’. Um, did they not get the memo? The guy just won a freaking Oscar, is having a kick-ass career, has a loving wife, and a wonderful family. Really, what else could someone want?

The magazine also alleges that the Bachelor‘s Juan Pablo is already cheating with his ex, which wouldn’t be surprising given everything we know about him.

And finally, sources tell OK! that Katy Perry‘s been telling friends and family that she left John Mayer, not the other way around.