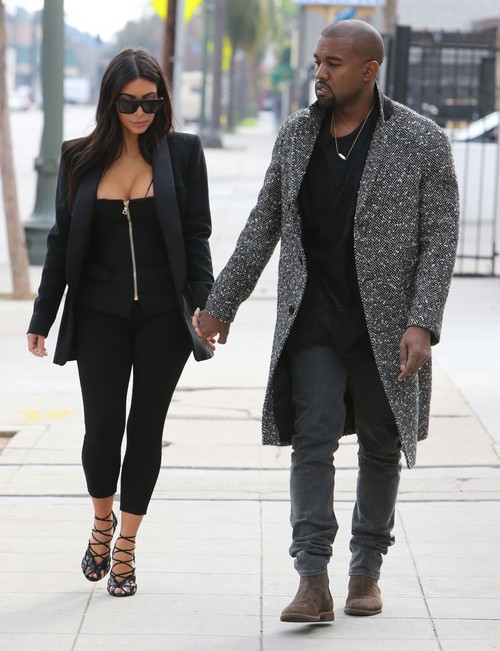 Kim Kardashian can’t seem to catch a break lately. Kim Kardashian has been plagued by rumors of divorce from hubby Kanye West, and if that weren’t enough…younger sister Khloe Kardashian wants to take over as the reigning hot Kardashian. All of the stress is taking a toll on her health, and it is beginning to show.

Tabloids have reported that Kim Kardashian has recently packed on some pounds, and now Radar Online has found even more proof that the reality star is stressed to the max—sharing recent pics of Kim that show a psoriasis flare up. Kim has suffered from psoriasis for some time. WebMD states that stress is a leading cause of psoriasis flare-ups, leading many to believe Kim is in a very bad place, emotionally.

Kim has felt in the middle of a tug of war over her desire to divorce Kanye West and her manager mother Kris Jenner’s demand to stay married for now. To add to her stress, Kim is upset over Kanye not being around because she feels it makes her look bad—as if Kanye doesn’t want to be around her. She wants the public to believe all men fawn all over her, but she’s not getting that from Kanye any longer.

With her image being the most important thing to her, it is really upsetting her that Khloe is going full force on the grab for attention, and is getting it. Khloe has been pictured wearing extremely tight outfits that accentuate her pumped up rear. She’s been amping up the injections in an effort to get her own chunk of the spotlight…while pushing Kim out. Khloe thinks that because Kim is a mom now, she doesn’t have the sexy factor like she used to. Khloe wants to take over as the hottest Kardashian and she’s not afraid of stepping on Kim’s star to do it. Kim recently slammed Khloe behind her back by saying she was getting fat after seeing recent pics of her.

That was Kim’s way of showing her dismay about Khloe’s growing butt. She wants the public to think Khloe’s butt is growing because she is gaining weight in an effort to make her look bad. Kim is furious that Khloe is using her MO to gain sex appeal. Shortly after slamming Khloe, she commented on how she wished her butt was smaller. Her goal is to make Khloe look bad for stealing her best asset for her own and now that Khloe is growing that behind, Kim is spitefully going to lay off the injections (claiming she is just working out much harder), and decrease her backside a bit. Kim wants to be unique and a stand out…now that Khloe is her KopyKat, she knows she needs to change things up.

Expect Kim to lose HUNDREDS of pounds soon… after she drops Kanye and a few pant sizes! Unfortunately, her psoriasis may stick around until she dumps that extra weight… and stress.