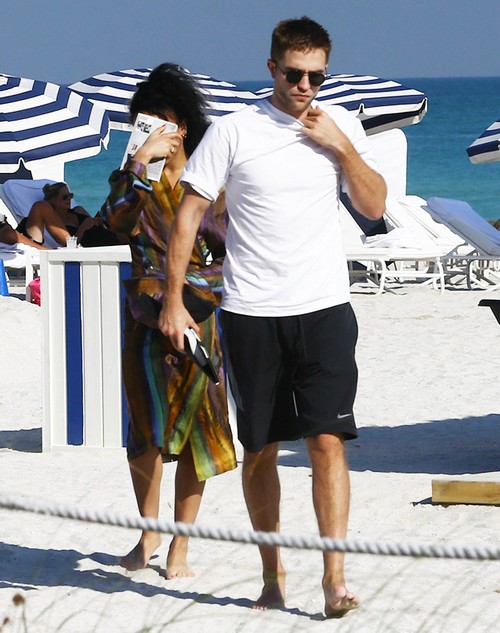 Kristen Stewart is in love with Robert Pattinson and is desperate to reconcile and date her Twilight lover once again. The problem KStew faces is that FKA Twigs has stolen Rob’s heart with her bedroom tactics and partying lifestyle and is currently dating RPatz. As CDL has made clear, FKA Twigs may or may not love Robert but is definitely using him to promote her music career, as anyone can plainly see. In fact whenever FKA Twigs appears in public or at a concert there is Robert Pattinson trailing along like a trained dog. And when the singer gives an interview what does she discuss, you guessed it, Robert Pattinson! We call a person who engages in that type of behavior a careerwhore and/or a famewhore. Poor Kristen….

When you’ve been single for two years after being dumped by your longtime boyfriend, it’s time to move on. Kristen Stewart has spent the last two years alternatively working, trying to land jobs, and moping around, trying to be an ‘artist’. She seemed to have a quarter-life crisis a few years early, although I’d say her breakdown actually started when she began having that affair with Rupert Sanders, her married director on Snow White and the Huntsman. I bet she wishes she never took that job now, huh?

Unfortunately for Kristen Stewart, whatever mistake she thought she was making in private become a full blown public scandal, and led to the demise of her relationship with Robert Pattinson as well as a huge hit to her reputation in Hollywood. She was dropped from the Snow White sequel, and she was taken off shortlists for major blockbusters and franchise films – even at other studios.

Now, for most people the career thing would have been the biggest blow, but Kristen actually recovered fairly well and moved on. She landed bit roles in smaller movies, and she’s stuck to the indie career path, which is what she was doing before Twilight found her. However, sources tell us that when it comes to her romantic life, Kristen Stewart still hasn’t moved on. She’s stuck in the past, mulling over how she could have re-done her relationship with Rob and whether there’s any way to fix it. Now, I don’t want to give any delusional Twi-hards any hope, but honestly, it’s not like she has a zero percent chance of getting back together with Rob.

I’ve said it before and I’ll say it again – Robert Pattinson and FKA Twigs have a ticking clock on their relationship, no matter how ‘in love’ they are right now. Their excessive famewhoring and blatant manipulation of the media to benefit FKA Twigs’ career will only come back to bite them in the ass, and then Rob will have the option of returning back to his ex-girlfriend – who waited patiently for two years, mind you.

What do you guys think? Is a Robsten reunion actually possible at this point? Let us know your thoughts in the comments below.