Kristen Stewart Jealous Of Robert Pattinson’s New Girlfriend, FKA Twigs, Or Happy With Her Own Girlfriend? 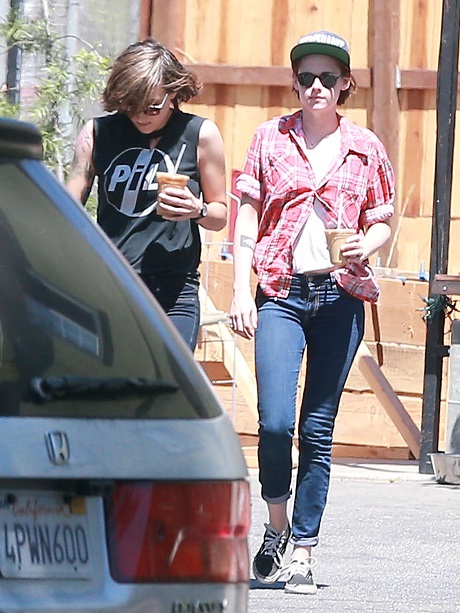 Robert Pattinson has a new girlfriend, FKA Twigs, breaking the hearts of millions of fan girls and Kristen Stewart in the process. However, we’re also hearing plenty of rumors regarding Kristen and her new are-they-dating-or-not relationship with Alicia Cargile, her alleged lesbian lover.

Sources close to Kristen have already denied the rumors, but Kristen and Alicia were spotted together the other day – coincidentally right after Rob’s new relationship hit the net. So is Kristen PR-stunting to prove that she’s over Rob? Or are she and Alicia actually dating? Or both?

If Kristen is jealous of Rob’s new girlfriend, then pretending like she’s over him and/or trying to make him jealous would be the logical next move. After all, she waited this long to get into a new ‘relationship’, so clearly she’s had a hard time moving on from him. Nobody forced her to cheat on him though, so our sympathies are limited.

On the other hand, it’s also possible that Kristen is just relieved that people will finally stop trying to link her with Rob now that he has a new girlfriend. If she truly is over him, then imagine how exhausting it must have been for her to keep reading stories about them hooking up and getting back together, even if it was the farthest thing from the truth? As such, now she’s free to date whoever she wants, without the Robsten stigma attached to all of her relationships.

Granted, this also means that #RobstenUnbroken is probably dead for good, for which we are sorry, Twi-hards. We know how much you wanted this, but at this point, it’s starting to look like both Rob and Kristen are over it. Rob has a new girlfriend, and even if Kristen is jealous of her, it’s not like she can make Rob dump his new girl and get back together with her.