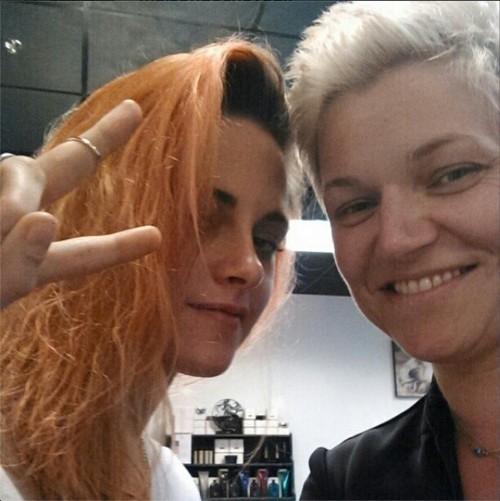 Kristen Stewart has just died her hair orange, ostensibly for her new role in American Ultra opposite Jesse Eisenberg. However, it really does beg the question – did she really need to die her hair? She’s worn a wig before for film roles, and she could have easily done it again – especially because the damage to her hair is starting to take its toll.

So why go all out and die her hair? The film’s a comedy caper, so it’s not like her hair color is all that essential to the film. It’s not based on an existing character, but rather an entirely original script based on a completely made-up story. Really, the only conclusion we can draw from that is that she wanted to die her hair for her own reasons, but filming provided her an excuse to change it without any extra scrutiny.

Our own sources tell us that a large part of her motivation for dying her hair is because Kristen felt she needed a change, a way to put Twilight behind her, once and for all. So she’s died her hair orange, rebelling against her look from Twilight in the most drastic way possible. Plus, it’s definitely a way to get Robert Pattinson‘s attention, something she’s having trouble with lately if the tabloids are to be believed.

We know they haven’t seen each other [publicly] since last fall. Despite the wishes of all the Twi-hards, Kristen and Rob haven’t reunited since then. But then again, all the rumors point to Kristen wanting a reconciliation whereas Rob is refusing to pay any attention to her. So what better way than to make a drastic splash in the news? It’s either a hair cut or sex tape that makes headline news these days, and there’s no way Kristen’s doing the latter.

What do you guys think? What motivated Kristen’s hair change, other than her role? And do you think it will get Rob’s attention? Let us know your thoughts in the comments below.