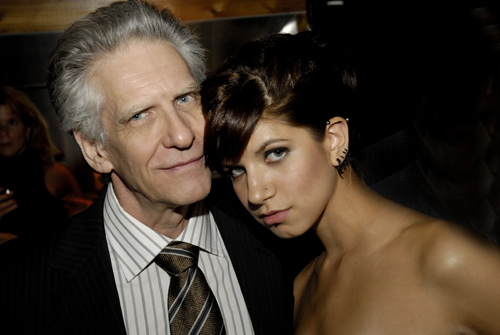 Robsten friends, I don’t know how to say this, but I know you’ve all been holding out hope for a Robert Pattinson and Kristen Stewart reunion. Unfortunately, that’s not going to happen. It’s not going to happen because Rob would never date Kristen again, and he’s gone and gotten himself a reunion with ex-fling, Caitlin Cronenberg.

Rob was spotted on the set of his new film in Toronto with Caitlin Cronenberg, who he was rumored to have hooked up with while filming Maps to the Stars last summer. In fact, he was spotted making out with a brunette who looked very similar to Caitlin, and who sources at the time had confirmed was actually Caitlin.

Then of course, Rob finished filming, left Toronto, hooked up with Riley Keough, and then had a brief reunion with Kristen Stewart. #RobstenUnbroken started trending worldwide, but just as soon as it started, it ended. Rob moved on, and it was pretty clear at that point that Rob and Kristen aren’t going to happen again.

So what’s the state of Rob’s love life been since then? Well, pretty much nothing – until now. While he’s managed to keep his love life relatively low-key, it’s hard to keep a sex buddy quiet when they’re visiting you on the set of your new film and you’ve worked with their director father in the past. Considering that Rob and Caitlin already have a history, would it be so hard to believe that they would reunite to have sex? For all we know, they could have been friends with benefits this entire time, or maybe Rob just called her in Toronto because he was lonely and wanted a quickie. Sure, he’s Robert Pattinson and he could have sex with anybody in the world, but it would probably be easier to have a fling with someone he knows and trusts instead of some random extra on the set.