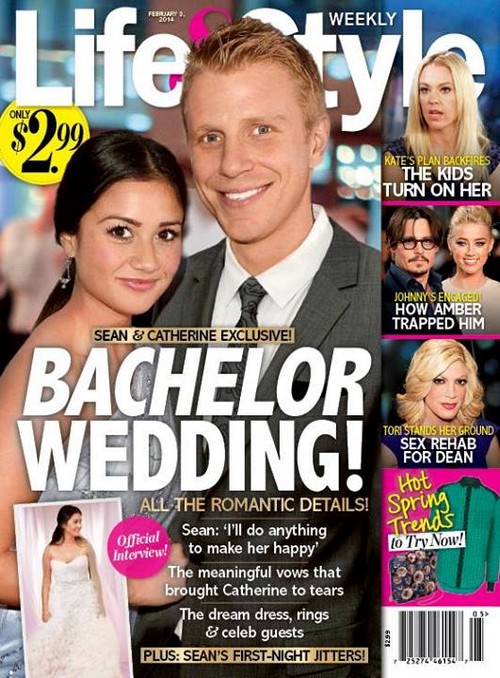 Does anyone else find it weird that Johnny Depp never felt the need to get engaged to Vanessa Paradis, who he was with for years, but one year with Amber Heard and he’s putting a ring on it? According to the latest cover issue of Life & Style Magazine, Amber Heard ‘trapped’ Johnny into it.

Honestly, I doubt Johnny’s stupid enough to get ‘trapped‘ in anything, but he does seem to be going through a mid-life crisis. Maybe getting married to Amber is what he needs right now? Or maybe he really is stupid enough to get tricked into a marriage he didn’t really want. It’s possible that Amber put an ultimatum on him, to get engaged/married or break up. And with this new cheesy and cliched version of Johnny Depp, I can see how he’d choose to get married rather than lose his young and hot girlfriend.

Life & Style also has a story about how Kate Gosselin‘s children have all supposedly started turning on her. Why wouldn’t, after everything she’s put them through? A lot of them don’t know better, but it seems like her eldest twins are slowly starting to wise up.

The cover issue also claims that Tori Spelling is ‘standing her ground‘ and demanding sex rehab for hubby Dean McDermott. Will she still divorce him? Well, she has too much riding on their marriage to not milk it for all its worth, so expect to keep hearing about this for the better part of the next few months.

Finally, Catherine Giudici and Sean Lowe are finally getting close to their wedding, and they give an exclusive interview detailing every single part of their big day, including the dress, the rings, the flowers, the guests, and the vows.