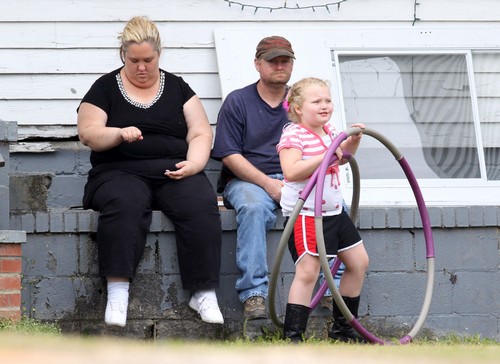 Apparently Mama June Shannon has had enough of our shenanigans when it comes to calling her out for dating that trash bag child molester Mark McDaniel. Since the word has gotten out, she’s been called everything amounting to being a terrible mother and just a horrible human being. Now, we’ve learned that she has dumped her boyfriend and child molester Mark McDaniel and is looking to rekindle her relationship with Sugar Bear.

She went so far with her nonsense to conjure up a cover story that Sugar Bear was using online dating in order to cheat on her with other women. We all quickly learned that it was a smokescreen for her to use to hook up with the guy who molested her daughter and was imprisoned for it for ten years. She certainly is mother of the year, isn’t she?

Now that TLC has canceled her money making show “Here Comes Honey Boo Boo”, it appears that June wants to try and work things out with Sugar Bear. If he had any sense bumping around in his nugget he’d tell her where to go in a New York minute.

June says that she has allowed Sugar Bear to move back into their home and that they are “working on the relationship.”

Of course she says that their relationship is damaged and that Sugar Bear is seriously hurt because of her decision to get down and dirty with that child molester ex-boyfriend of hers. June says that they aren’t exactly “back together” just yet and that it will “take a lot of work” to get back the trust she lost for being a lying skanky hillbilly with that nasty child molesting ex of hers. Of course, we are using our artistic license with saying that she is skanky.

Sugar Bear needs to run far from this trainwreck and run fast. In fact, she made it all worse because she lied about not seeing that filthy child toucher. She says, “I’m human, I made mistakes and done wrong, but no one is perfect.”

Did she just excuse away her decision to have sex with the man who molested her underage daughter and served time for it? Filthy scum. That is all.