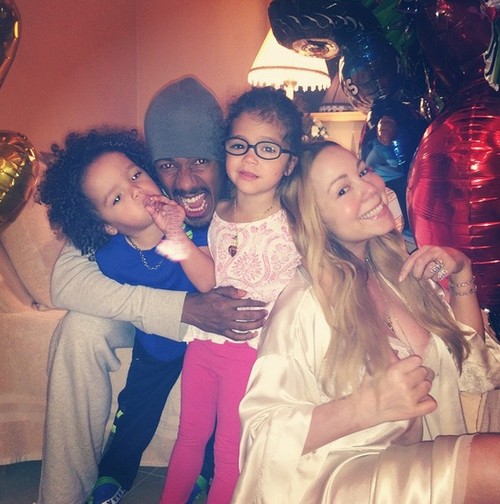 Nick Cannon and Mariah Carey have officially separated, although the details of their divorce haven’t been made public. Mariah reportedly made Nick sign a confidentiality agreement to ban him from discussing their divorce in public, and he probably agreed to spare his children the grief of dealing with a custody battle. However, sources tell us that Mariah’s determined to make Nick’s life hell through their divorce proceedings, especially because she suspects that he cheated, which means that regardless of his best intentions, Mariah might make Nick fight for their kids.

Mariah and Nick have 3-year-old twins, Moroccan Cannon and Monroe Cannon, and they’re obviously still too young to know what’s going on with their parents. However, Nick had made it very clear that his priority is his children – which means that he will try very hard to agree on whatever is best for them. But that being said, what if Mariah insists on fighting him? Is it possible that the twins will get split up in the ensuing custody battle?

Many celebrity couples who deal with affairs or difficult marriages end up getting contested divorces, with a lot of arguments and bad blood. We know that Mariah and Nick are absolutely not going to end things on ‘amicable’ terms – for one, Mariah’s ego will NEVER allow that. For another, she’s reportedly still bitter about the Kim Kardashian connection, which means that she’ll continue to stay angry at Nick. But if Nick fights back, does that mean the kids will get split up? Celebrity custody battles are notorious for splitting kids up or settling on one parent custodial arrangements, and it’s possible that Nick and Mariah refuse to agree on an arrangement that puts the kids above their own needs. I don’t think it’ll come to that though – Nick seems conscious about keeping his kids happy, and that means keeping them together.