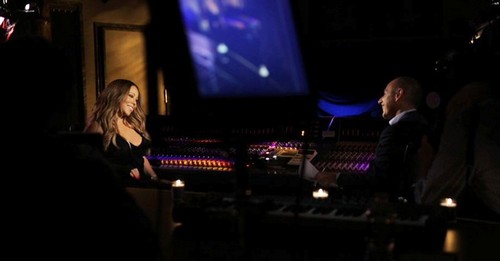 Mariah Carey will do anything to deflect attention away from her rumored marriage troubles with hubby Nick Cannon. This includes giving at-home concerts and letting camera crews into her house, which is exactly what she ended up doing. Mariah was interviewed by Matt Lauer in an extensive NBC segment, most of which is taken up by Mariah [fake] tearing up.

Seriously, it’s Mariah Carey we’re talking about. She’s the queen of putting on performances, and that entire thing is obviously contrived. When asked about her ’emotional state‘ right now, Mariah gave a long-winded answer stating, “Look, I’ve always been a pretty vulnerable person. But I built up — I have learned how to build up a wall. So when I have to, I can put up that wall, and leave it there, and walk in the other direction. And that’s what I have to do sometimes with people in my life when they just don’t get it, that I’m a person like them.”

What?? Seriously, what? Did she basically just give an answer without actually answering anything? Because whatever she said made very little sense, especially on closer inspection. She’s saying she’s vulnerable, okay. We got that part. Then she says that she’s learned to build up a wall. Ok, we’re still with her.

Then, it becomes gibberish. She leaves the wall up for other people, and then she comes back, and these people don’t get ‘it’, whatever ‘it’ is. Then, she says she’s a person just like them…. which was what she was trying to say from the beginning?

Was all this a weird way of addressing all the tabloid rumors on her supposed divorce? Was she trying to say that she ‘put up a wall’ with Nick? See what I mean – gibberish. But whatever else, she did a good job of making it seem like she still has the perfect life, even if she tried to inject some relatability into her interview. We get it, Mariah. You have a ‘wall’ against certain people, and you have lots of money, and you’re very talented. Good for you.