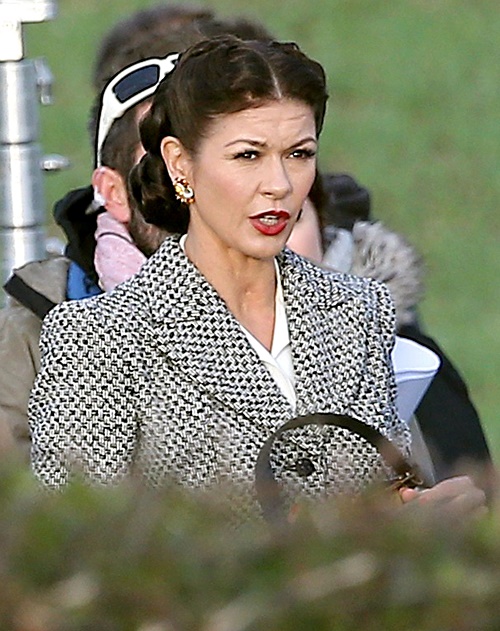 Michael Douglas and Catherine Zeta-Jones have somehow beaten the odds and stayed together all these years, even though they had a temporary separation last year. Through Michael’s Stage 4 throat cancer and through Catherine’s treatment of her bipolar disorder, the couple has stuck with their marriage – and this despite their 25-year age difference. However, divorce always seemed like it was around the corner, and it really came down to who would pull the trigger on their marriage first – Michael or Catherine.

According to the National Enquirer [which has definitely leaned pro-Michael Douglas throughout this whole marriage debacle], Michael is definitely the one who’s initiating the separation this time. According to the Enquirer’s sources, Michael has collected a ‘dossier of his wife’s shocking secrets’ as he gears up for a ‘$300 million divorce‘. The source elaborates, “While the dossier may help him in a divorce battle, it’s shattered him because he did everything to make the marriage work through very tough times!”

Apparently, Michael thinks that Catherine lied to him about seeing her former fiance, John Leslie, in 2010 when he was in the midst of fighting off his throat cancer. Then again, he did tell the whole world that Catherine gave him the cancer, so… can one really blame her for ditching him, cancer or no cancer?

The source also adds that Michael has started questioning Catherine’s sobriety, explaining, “Catherine hasn’t stopped drinking and Michael feels it’s really dangerous for the mother of his two kids to mix booze with medication she takes for her bipolar II condition.”

Basically, Michael Douglas is compiling a laundry list of complaints to throw at his wife, including her refusal to attend major awards functions with him. Considering the fact that the couple has already listed their country house in Bedford for sale, the official divorce is really only a matter of time. For one thing, Catherine and Michael already had a fairly successful trial separation in 2013, and according to sources, it was only for monetary and publicity purposes that they stayed together. But if all of this is true – and I don’t see why it wouldn’t be – then Michael and Catherine have definitely grown apart in more ways than one, and it’s simply become too difficult to stay together.

What do you guys think? Will Michael Douglas and Catherine Zeta-Jones end up getting an official divorce soon? Let us know your thoughts in the comments below.